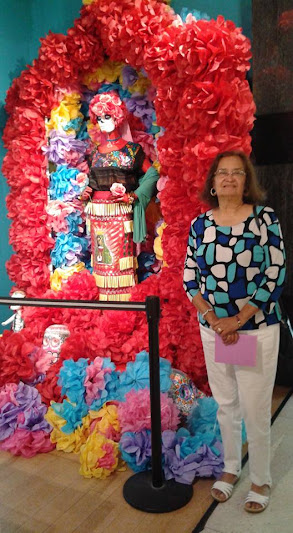 Happy Hispanic Heritage Month! September 15th through October 15th is Hispanic Heritage Month. Why doesn't it start on the first? I have no idea. To be honest, this is the first year I've publicly acknowledged it because I usually don't know it's coming and forget about it once it's here. I have an odd relationship with my heritage, but the fact is I'm proud to say I'm Mexican American, born and raised in Texas.

I wasn't always proud of my heritage. In fact, I spent my entire childhood and adolescence wishing I was white. This is a fact that I've only come to realize, and come to terms with, in the past few years and I feel like I've missed out on so much of my rich culture.

The photo to the left is of my mama at an art installation I took her to for Mother's Day a few years back. It featured the Virgin de Guadalupe, a symbol that holds a special place in my mama's heart. As a teenager, I wouldn't have wanted to attend such an event. I rebelled against learning conversational Spanish. I never dressed or spoke in a way that would reflect my Mexican heritage. Looking back I can't say exactly why I felt that way, but being Mexican always felt like a stigma. I saw various things in my youth that led me to that, but there were a lot of wonderful things too, and I can only blame my perception of what was beautiful and accepted for missing out on that part of my culture.

I was raised on the north side of Houston in a diverse area, but mainly Hispanic. For middle school I was sent to a magnet school in a predominantly African American area but there were still different cultures around me. However, my closest friends were white. Once I hit high school we moved north to the suburbs and I was in a predominantly white school. It was a completely different social, economic, and cultural climate. I wanted to fit in like any teenager. I wished daily that I'd been born white, but that idea was never so simple in my head. I wished I was blond. I wished I was tall and thin. I wished I could wear the same clothes as my white female classmates and look the same way they did. But still I didn't realize I wanted to be white. I begrudgingly took Spanish class because I knew I could ace it, and I did. I was a member of the Spanish National Honor Society without being able to hold a conversation with my grandma in Spanish. I was a fraud. I felt like an impostor.

It's been a few years since I've embraced being Hispanic, but eleven or so years ago when deciding on a pen name I didn't think twice about using Missy Jane. My real name is Melissa and Missy is a nickname. My real middle name is Jane. I joked that it would be easier for me to remember, but was that all? I can't help but wonder if I was subconsciously suppressing my roots. Was I trying to hide my brown skin with an Anglo-sounding name? Perhaps. If so, it wasn't something I thought about until the past few months when more and more Latinx authors have become known to me. They're all over Twitter proudly proclaiming their heritage. They put it in their books and on their beautiful book covers. Once again I feel like a fraud. I almost never write a blond character, but they do tend to have pale skin. I've started to make them darker. I've started to add a kink to their hair. I've started to hear Spanglish as I write and yearn to include it whenever a conversation happens that I know could happen in my own family.