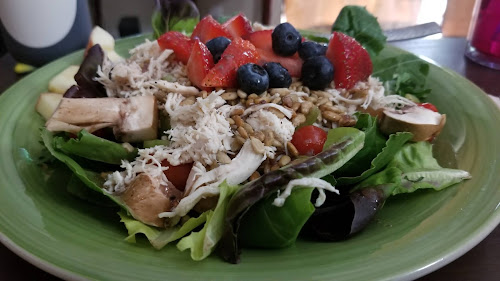 I don't remember there ever being a time that I had to go without eating because of a lack of food. If you follow my Instagram, you know I get to eat some pretty good looking dishes. Growing up, there were some lean times and we certainly didn't have steak and lobster on the menu that I ever remember, but we did eat. My husband and I were young parents and there was a lot of Hamburger Helper in the early years of our marriage, but again, food was available for every meal. However, recent online posts of college students being given hardly anything during quarantine has created such an unexpected anxiety within me that I've had to really stop and think of why I seem to suffer from food insecurity at times. I don't go without. My family doesn't go without. But while kid #2 was in college I constantly worried about her having enough to eat. Kids #1 and #3 now live on their own and it's still something I worry over.
I was having this discussion with the family over breakfast and brought up my confusion over how emotional I get. Daughter #2 brought up something I had told them about my maternal grandma. Nana had lived through The Great Depression and knew what it was like to really go without. So she had some habits that confused me as a child but I understood as I got older. For one thing, she saved everything. She wasn't a hoarder, but more like the ultimate recycler back before it was cool. If Nana could find an alternate use for anything it never saw the trashcan. One thing I clearly remembered was her always scraping the bits of leftover food from our plates into a bucket for the neighbors livestock. It grossed me out, but she said it helped the neighbor. Anything that helped the neighbors was expected to be done without complaint.
Maybe it was knowing how Nana felt about food, and other things, that has the anxiety over a lack at the back of my mind? I have no idea. As I stated above there has never been a meal I missed because we couldn't afford to eat. Sure we've had to survive on ramen and rice and beans a few times, but even that was plentiful for our family. The thought that any child (yes I still consider college students children) is having to go without because of the greed or incompetence of the institution they've given money to absolutely infuriates me. Luckily, some enterprising students created an Instagram page for food donations. But this came to light because of a viral video. What about the kids we haven't yet heard about? Many campuses started classes two weeks ago. I can't wrap my mind around the thought of anyone's child going without food for a single day, much less two weeks.
If you would like to donate to a worthy cause, find your local food bank, and if  you don't have extra funds donate your time. Volunteering at the Houston Food Bank is something I've done a couple of times and plan to do again. We should all endeavor to help those around us who need access to food.
Posted by Author Missy Jane at 7:00 AM