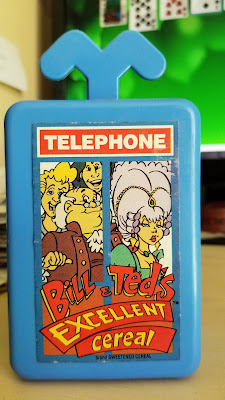 In February of 1989 I was thirteen years old and suffering through the Spring semester of my eighth grade year. All I cared about was heavy metal music and learning how to play guitar. All I wore was black concert t-shirts and real denim jeans (yeah we had those back then) with holes in the knees, plus the requisite Converse, or as we called them "Chucks". I don't remember how I watched the first B&T movie, but I remember wanting everything I could get my hands on. The photo to the left came out of a box of Bill & Ted cereal. I don't even remember what it tasted like. I also have a Bill & Ted comic book in my collection. Maybe someday I'll even read it.

To say I was excited at the prospect of a new Bill & Ted movie is a bit of an understatement. I was ecstatic and fully prepared to head to the theater for opening night. Thanks to the pandemic (haha, yeah 'thanks') I didn't even have to leave my livingroom. In preparation for watching Bill and Ted Face the Music, my family watched Bill and Ted's Excellent Adventure and Bill and Ted's Bogus Journey. I think it's safe to say the first one is still my favorite.

If you've never seen B&T 2, the third movie might have you scratching your head at some of the characters and the role they play. In the 2nd movie Bill and Ted meet Death, who at the end of the movie joins Wyld Stallyns. He plays a big role in that movie so I wasn't surprised to see him in the new one. However, I was pleasantly surprised to see that a majority of the actors from the first two movies reprised their roles for number three. It was great to see familiar faces, but a little sad to know that George Carlin could only be shown as a hologram since we lost him in 2008.

This movie was as ridiculous as I expected it to be, but better. I love that they went back to the format of the first movie in going through time to find historical figures. That it was Bill and Ted's daughters made it even better. I got goosebumps when Jimmie Hendrix started playing against Mozart. That was the best scene in my opinion and something I would've loved to see expanded on. Could you imagine being able to get legendary musicians from all through time together to jam? That absolutely made the movie for me. I also loved the couples therapy scene. It was exactly as I would've expected Bill & Ted to act with their wives even after twenty-five years. Absolutely hilarious.

The whole movie has a lot of throw-back to the first two movies. I like that they didn't act as if the second one never happened, or try to change any major plot points. I've seen some people on Twitter upset that a fat suit was used. I do understand those who are upset over it, and honestly it could've been left out. I believe the point was to show that Ted was drinking so much he gained weight, but other things pointed to him drinking too much so it could've been left out. That's really my only complaint about this movie.

This one won't win any awards or hit any Best of lists. However, considering the chaos all around us in the year 2020 I think it was just the type of refreshing mindless entertainment we need. It had great music, ridiculous jokes, and Keanu and Alex stepping right back into their characters as if they were slipping on well-worn jackets. I loved it and will definitely be watching it again.

If you decide to watch it take note, there is a final scene after all of the credits that's worth the wait.

Posted by Author Missy Jane at 8:00 AM