Alas, I've been remiss in posting anything to my blog in the month of November. Oops! To be honest, I didn't stop to think about what participating in NaNoWriMo would do to my blog, any other writing I have going on right now (Which is a ridiculous amount). I knew I absolutely had to finish Born of the Forbidden: Gargoyle Masters Book III, because I had promised myself I would get it out into the world by the end of 2020. After all, I need something positive to show for the hell this year has been.
So far, NaNo is going fairly well. It was a little slow going at the beginning because I was finishing BOTF also, but I completed that within the first week of November and it's the in the capable hands of my editor now. There's a sense of freedom that comes over me once I've sent a book off to my editor. I refuse to open that file again until edits are sent back to me, because I know I'll want to alter or add something. So, because I can't look at it anymore, I'm free to move on to something else. I really like that feeling. Right now I'm writing an erotic romance for NaNo. I've been saying it's the sequel to Lunchtime Sex, however, it may actually be book 3 in my Sophisticated Women series instead of book 2. I'd tentatively started book 2 a while back, and I think this current story will fit better in the timeline as the finale. We'll see.
Sophisticated Women book 2 is currently titled Breakfast in Bed, and book 3 is Dinner for Two. Both of them will follow the theme of an older woman with a younger man. Breakfast in Bed involves a hot pool boy, and in Dinner for Two the heroine falls for a college student after she poses nude for his art class. I'm having a blast writing this one, and I hope y'all will enjoy it once it comes out. Before it's release, however, Born of the Forbidden will be available. As soon as I have a release date I will let the world know. The first people to be told will be my newsletter subscribers. They're going to get the first peek at the cover as well as an excerpt from the book. Not a subscriber? Sign up here. I promise you won't be inundated with emails from me. I only send them out to announce new releases and personal appearances. So, most likely you'll get about four a year.
All righty, break time's over. Back to my NaNoWriMo WIP!
Posted by Author Missy Jane at 8:00 AM No comments: 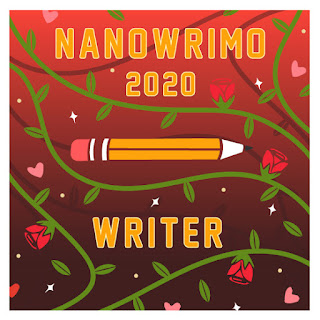 It's November! Feliz Día de los Muertos! Happy Diabetes Awareness month! And if you're participating, Happy NaNoWriMo! As you've probably guessed by the picture to the left, I am participating this year. It's been a while since I did so, but the words are finally flowing again so I decided why the hell not. I'm hoping to end 2020 with a completed book or two to add to my published page next year.

This year's NaNo offering will be a sequel to Lunchtime Sex, tentatively titled Dinner for Two. I actually already started another book in this series that I thought would be the sequel but I guess it's going to be book three now. We'll see which one gets finished, edited, and covered first. That one will most likely be titled Breakfast in Bed (see the theme there?) All three are part of my Sophisticated Women series, which is an older woman/younger man series of forty-something women getting their groove back and the twenty-something men who help them with that groove. They are erotic romances, and definitely have HEA endings. 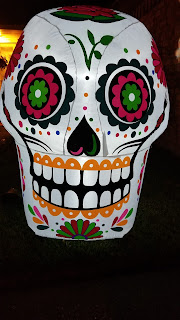 Being Hispanic, Día de los Muertos is a holiday I've always been aware of but don't technically celebrate in the traditional way. My mother used to create an altar every year but I never have. My son expressed an interest this year but it was too late to make one. However, this is definitely on the list of to-dos for next year. To anyone who is celebrating with an altar, post pictures! I love to see the creativity that goes into celebrating our loved ones. Mine will probably be mostly about my maternal grandmother and paternal grandfather. I also have two cousins I'd like to honor. Do people include their pets? This year I lost my beloved cat Cheetoh and years ago I lost my dog Baby who was seven years old. I think they both deserve a place on my altar.
November is also Diabetes Awareness month which is important to my family, too. My seventeen-year old son was diagnosed with Type 1 diabetes at age seven, and my husband and I have been diagnosed with type 2 in the years since. As a family we strive to do the things necessary to stay healthy and support the efforts of organizations like JDRF. We usually participate in their walk every November. It's going to be virtual this year and I'll admit we did not sign up for the first time since my son's diagnosis. With everything going on in 2020 I just didn't have the mental bandwidth to handle the fundraising efforts required for that endeavor. Though it makes me sad we won't have a sign with his smiling face this year, I knew it was too much to ask of my family, friends, and myself. Here's hoping 2021 will return to normal.

Posted by Author Missy Jane at 11:05 AM No comments:

Email ThisBlogThis!Share to TwitterShare to FacebookShare to Pinterest
Labels: Dia de los Muertos, JDRF, NaNoWriMo, Sunday Reflection
Newer Posts Older Posts Home
Subscribe to: Posts (Atom)
*All photos used on this blog are either my own original photos or ones I have personally gained permission to use from the photographer or from the model who in good faith has told me he/she has ownership of their photos. No photo on this blog can be used without express permission from myself or the owner of the photo(s).*