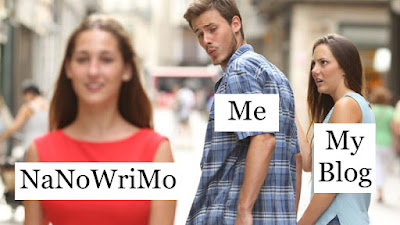 Alas, I've been remiss in posting anything to my blog in the month of November. Oops! To be honest, I didn't stop to think about what participating in NaNoWriMo would do to my blog, any other writing I have going on right now (Which is a ridiculous amount). I knew I absolutely had to finish Born of the Forbidden: Gargoyle Masters Book III, because I had promised myself I would get it out into the world by the end of 2020. After all, I need something positive to show for the hell this year has been.
So far, NaNo is going fairly well. It was a little slow going at the beginning because I was finishing BOTF also, but I completed that within the first week of November and it's the in the capable hands of my editor now. There's a sense of freedom that comes over me once I've sent a book off to my editor. I refuse to open that file again until edits are sent back to me, because I know I'll want to alter or add something. So, because I can't look at it anymore, I'm free to move on to something else. I really like that feeling. Right now I'm writing an erotic romance for NaNo. I've been saying it's the sequel to Lunchtime Sex, however, it may actually be book 3 in my Sophisticated Women series instead of book 2. I'd tentatively started book 2 a while back, and I think this current story will fit better in the timeline as the finale. We'll see.
Sophisticated Women book 2 is currently titled Breakfast in Bed, and book 3 is Dinner for Two. Both of them will follow the theme of an older woman with a younger man. Breakfast in Bed involves a hot pool boy, and in Dinner for Two the heroine falls for a college student after she poses nude for his art class. I'm having a blast writing this one, and I hope y'all will enjoy it once it comes out. Before it's release, however, Born of the Forbidden will be available. As soon as I have a release date I will let the world know. The first people to be told will be my newsletter subscribers. They're going to get the first peek at the cover as well as an excerpt from the book. Not a subscriber? Sign up here. I promise you won't be inundated with emails from me. I only send them out to announce new releases and personal appearances. So, most likely you'll get about four a year.
All righty, break time's over. Back to my NaNoWriMo WIP!
Posted by Author Missy Jane at 8:00 AM