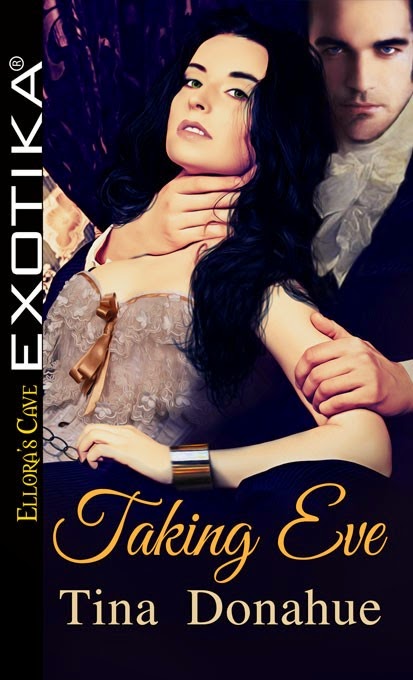 My EC buddy Tina Donahue has a hot new release out today!!

Dreams of a manor where submission and dominance once ruled draws Faith to hypnotherapist Colin Danes. Potently virile, he looks remarkably like her most cherished master from a past life. Desire smolders in his eyes, proving he’s never forgotten her.

Their carnal dance continues in the present and leads to their past when she was known as Eve. Through hypnotherapy, Colin brings her back to the Victorian era, a hidden estate where she eagerly submits to whatever he and her other noble masters crave. The exquisite discipline of the strap. Being bid on and mounted each night. Displayed and used for the enjoyment of all.

Most will take her. One will try to imprison her. Only he will be her true master in that life and this.

Eve was still bathing when he came for her. A man whose presence she’d frequently felt. A stranger she’d often seen riding past this cottage, his steed magnificent, a sorrel with a startling white mane and tail.

At those times, she’d noted the man’s well-defined features, noble bearing, the way his attention had focused on her alone. How his gaze had lingered and possessed, warming her skin, calling to everything female within her, demanding her submission. She’d given it, not moving, scarcely drawing a breath, her work forgotten.

Nothing except him had mattered.
Not once had he spoken or made a demand. During his increasingly prolonged observations of her, he’d been content—or obliged—to do no more than look.

Now, she saw the rope he held in one gloved hand.
Eve’s belly fluttered.

The ends of the rope jumped as he moved past the doorway, his height requiring him to stoop to avoid striking his head. He wore no top hat. Snow dusted his dark hair and shoulders. His ankle-length cloak was of fine black wool, lined with fur, his eveningwear consisting of a dark coat cinched at the waist and trousers of the same color. Fresh milk couldn’t compete with the flawless white of his vest and cravat, tied perfectly about his throat.
He closed the door, bolting it against interruption of what he was about to do.

The thought of it—and the metal’s sharp clack—caused Eve to start. Her pulse pounded fiercely. The candles Mrs. Trumble had lit stopped flickering at the wind’s departure. A few stray snowflakes floated in the air.

Eve felt none of the chill that he’d brought inside, only intense heat, spreading from her chest to her belly and cunt, then to her neck. Her throat tightened, not allowing her to make any sound as he stopped just short of the tub. Close enough for her to see his lushly lashed eyes, of the purest blue, more glorious than any sky.

He regarded her naked breasts to the exclusion of every other part of her and spoke for the first time. “Pull back your arms and arch your back. Present yourself to me.”
His voice was quiet yet commanding, smooth yet rough with arousal.

Unsteady with desire, Eve did as he wanted. She had no other choice. She wanted none. With her back arched and her arms drawn back, she lifted her breasts in offering.

He studied the ripe globes and her tightened nipples at a leisurely pace, moving from one side of the tub to the other to get his fill.
Eve remained a silent, obedient witness to his brazen perusal. Craving and enjoying it, desire pulsing through her.

A small smile touched his lips as her breasts quivered with her
quick breaths. At length, his attention moved lower, to the part of her the bath continued to hide. Its violet-scented water reflected the candles’ flames, which tinted it gold and orange. Warm colors that hardly matched the heat blazing within Eve.

Eve thought not, so she shook her head.

He seemed pleased by that and began, “From this moment forward, you’re never to cover yourself in any of your Masters’ presence. Your breasts, nipples, mouth, cunt, ass and anus are ours to use as we please. Whatever we require of you, no matter how demanding or indecent, you’re to obey with the greatest haste. You belong to us now. We have your agreement. Did you make it willingly?”


Please leave a comment. Tina will be choosing one winner randomly from the comments section. The winner gets her choice of one of Tina’s backlist ebooks – FIFTEEN IN ALL – contemporary, paranormal, suspense, ménage. 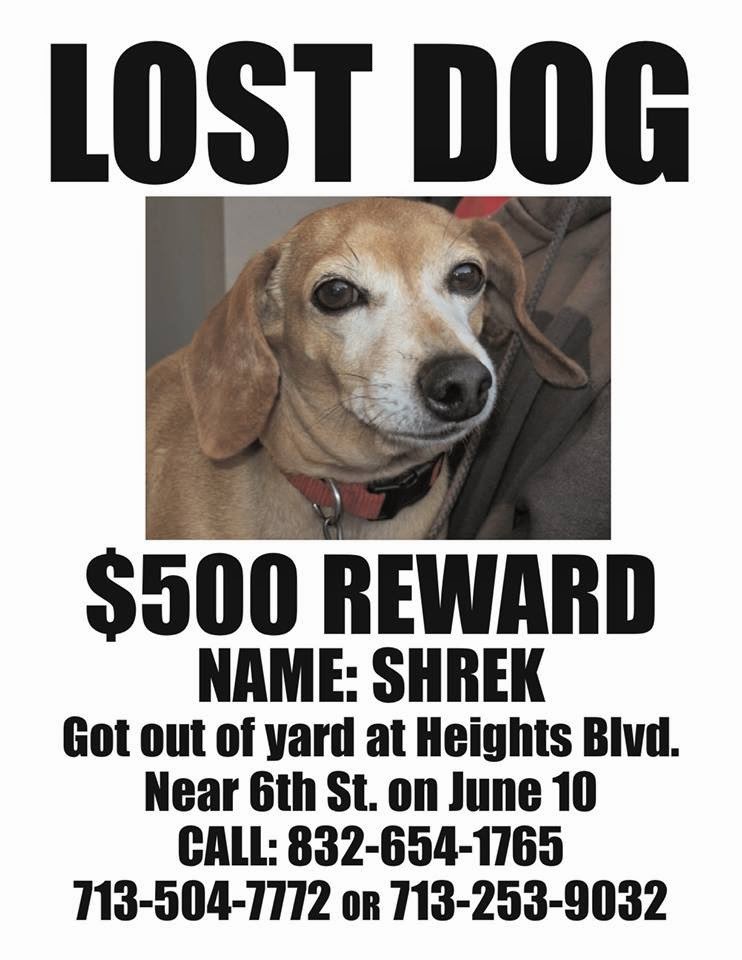 Though I'm not currently a pet owner, if someone were to ask I'd probably claim to be more of a cat person. I've owned both in the past, but my current attitude of not wanting to bother with much makes me lean toward cats when considering future pets. However, my office is in the business owner's home at the moment, so we have an office dog: his miniature dachshund named Shrek.

I didn't realize how close I've gotten to this little dog until Wednesday morning when I arrived at work to find him missing. He had somehow gotten out of the gate and was roaming the streets of Houston on a grand adventure. Meanwhile, the humans in his life were freaking the hell out. Work skidded to a halt and sat on the back-burner as we literally walked the streets, knocked on doors, and begged local businesses to post his flyer in their windows. It was a hot, sweaty, emotionally harrowing experience that I never want to repeat.

Amazingly he was returned to us safe and sound Thursday night. I'm sure he thought he was on vacation, much as his owner currently is, who has no clue Shrek was ever missing. Overall, it was a nerve-wracking few days and I'm emotionally wrung-out from the experience. But at least Shrek is now home where he belongs.

I hope your week was nice and uneventful.

Posted by Author Missy Jane at 7:09 PM No comments:

Here is yet another belated blog post as I recall my awesome Memorial Day weekend at Comicpalooza in Houston. One of the things I love most about this event is that it's in my home town, so I get to attend the entire weekend with little fuss. 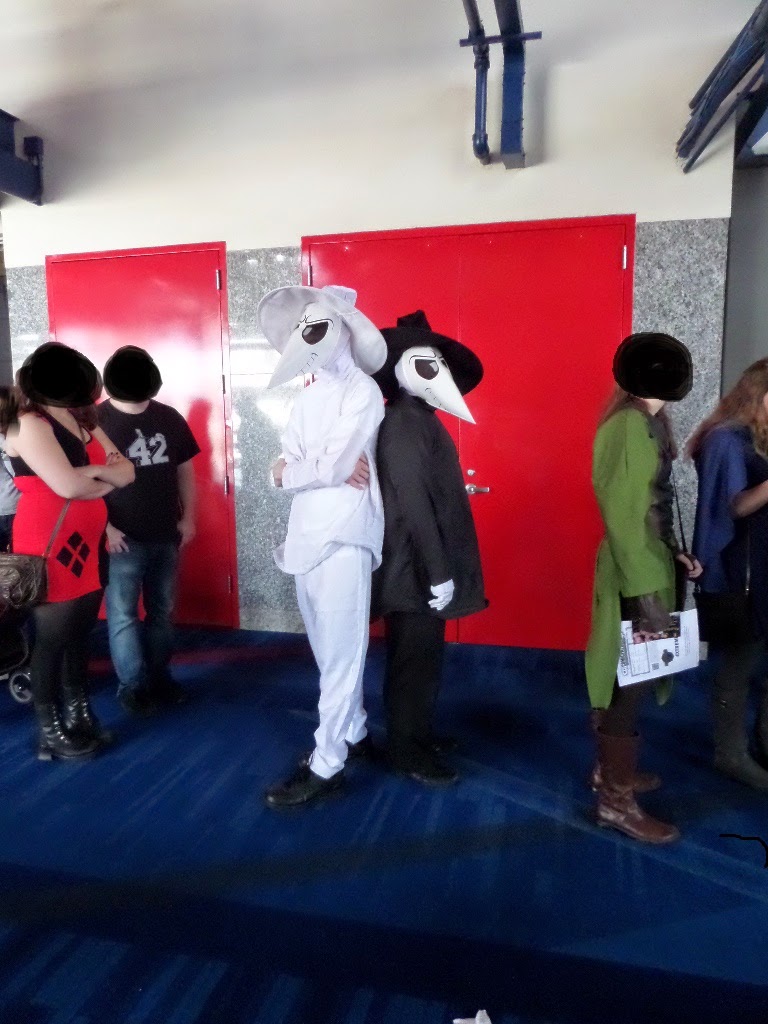 There are always so many amazing costumes at this con, it's hard to get photos of them all. I didn't take nearly enough this year! In the ones I'm posting here I blacked out the faces of innocent bystanders who might not want their faces all over my blog. 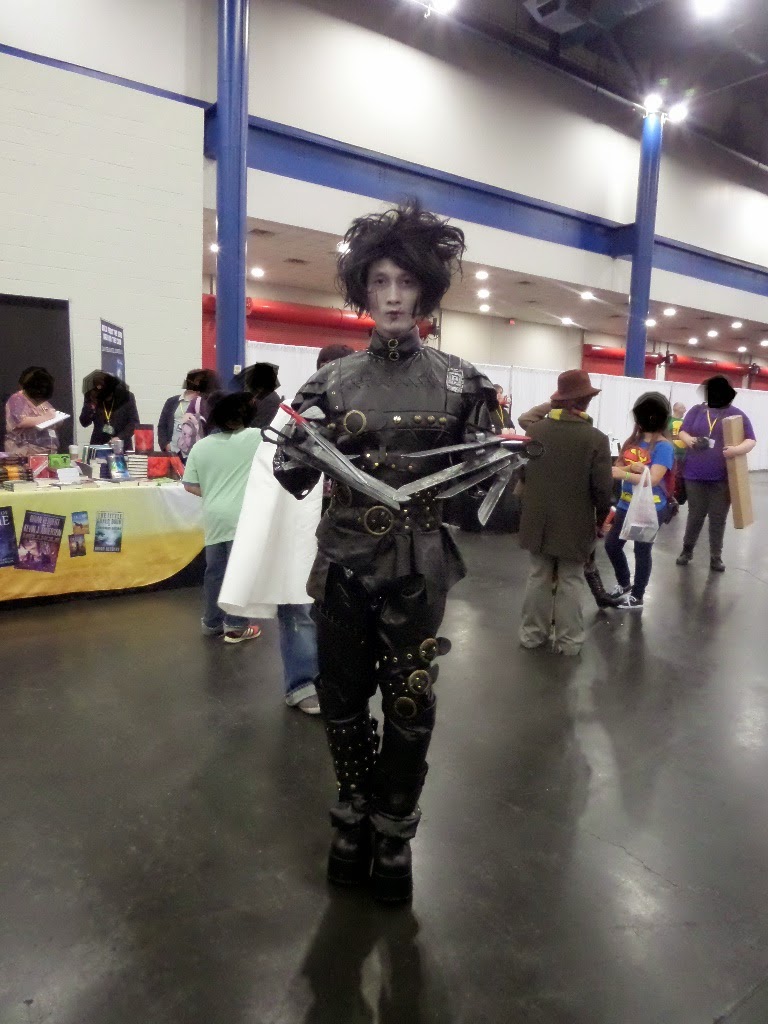 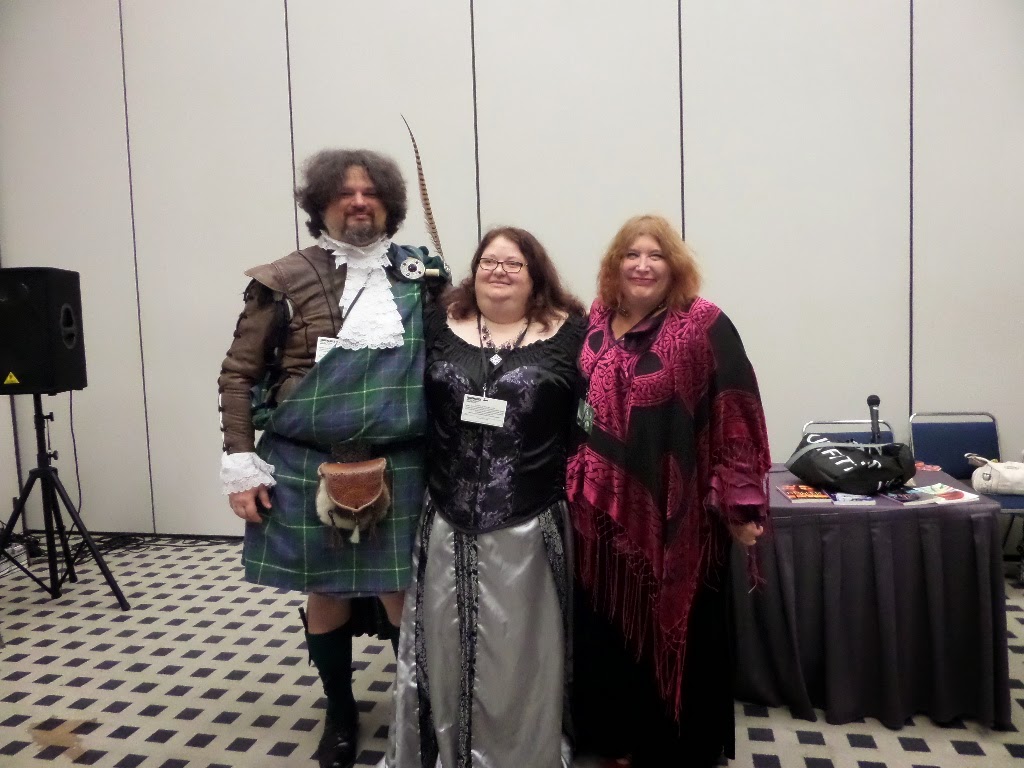 Like any good con, Comicpalooza is loaded with panels and workshops. This year's Literary track was amazing. One panel was all about Celtic writing. Cornelia Amiri, and Heather and Christopher Dunbar really know their stuff in this genre. I was very impressed. 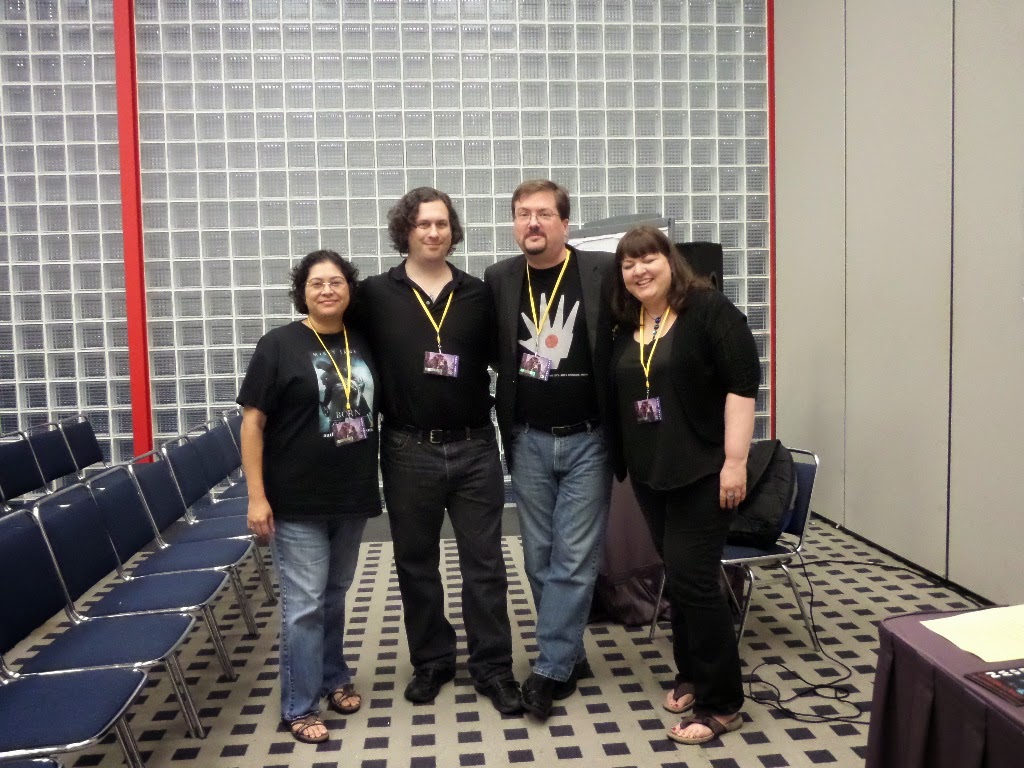 I was honored to share a panel on Brainstorming, Mind Mapping, and Free Writing with Leo King, George Wright Padgett, and Emily Evans. I'll never think of Frankenstein the same way again. 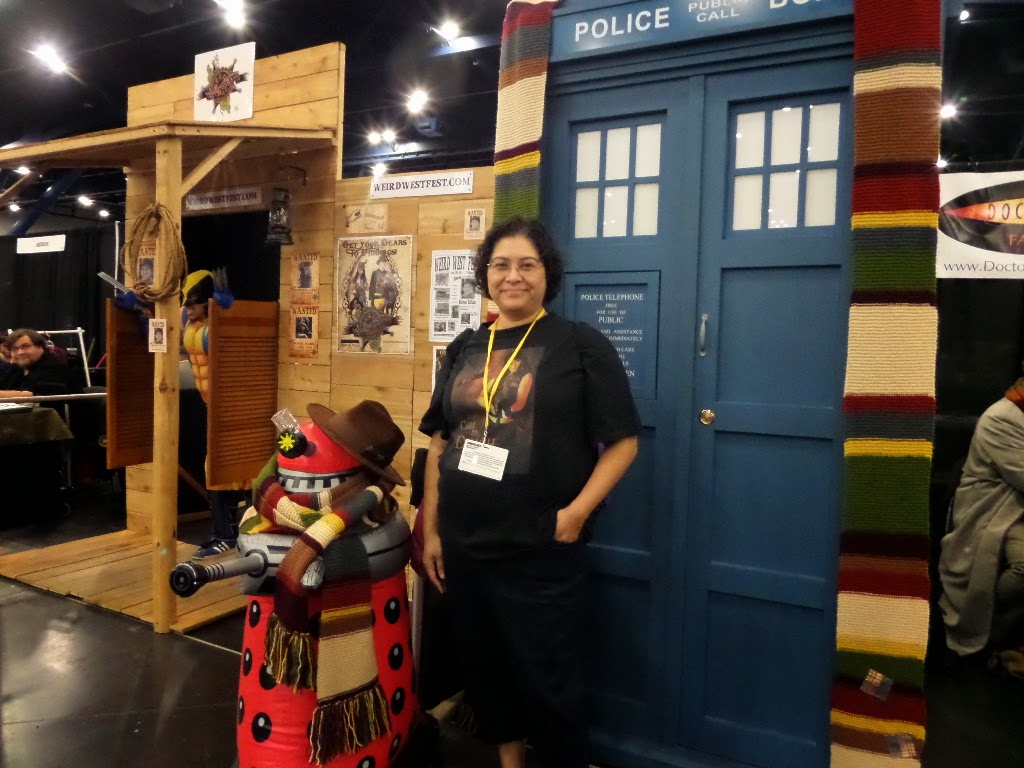 Doctors abounded at the con but unfortunately I didn't get a photo with one. I did the next best thing and tried to run away in a Tardis instead. 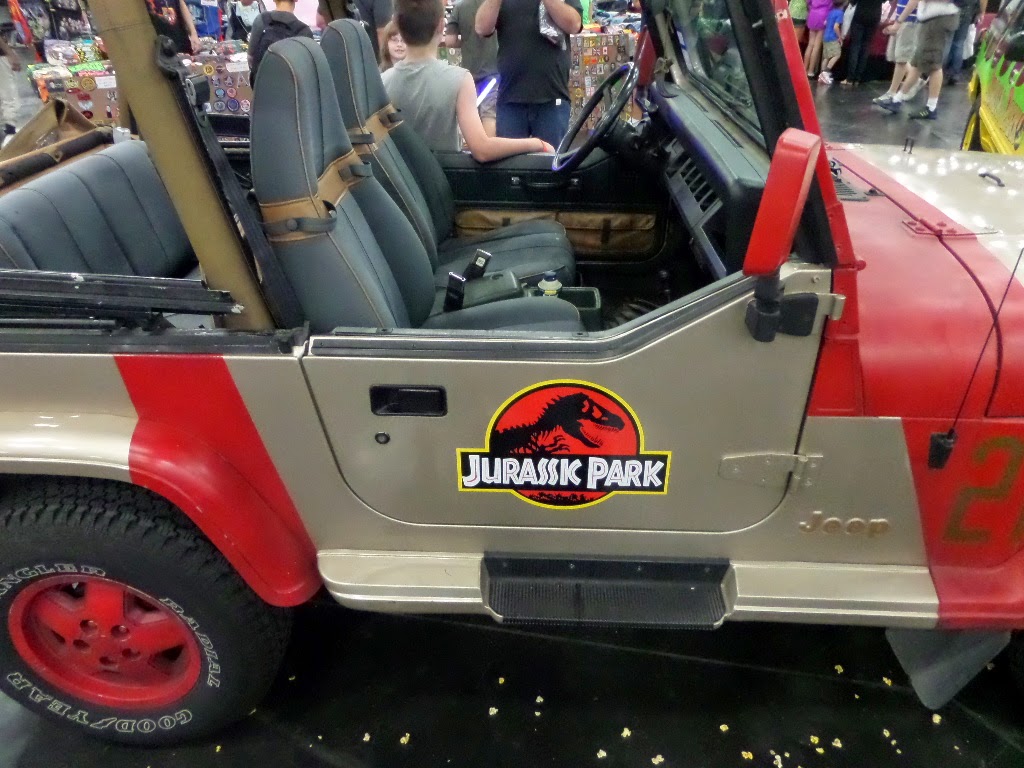 Since the Tardis was apparently out of gas I considered the Jurassic park jeep...but then I remembered how that turned out in the movies. 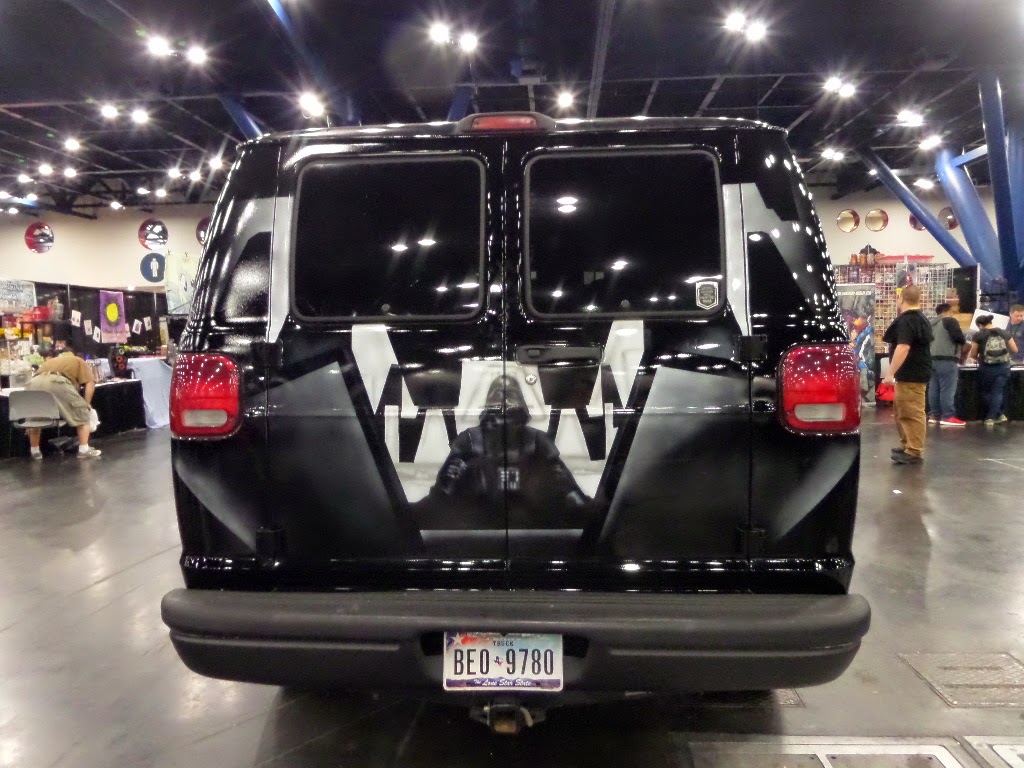 Was there a van in that far, far, away space, a long, long time ago? 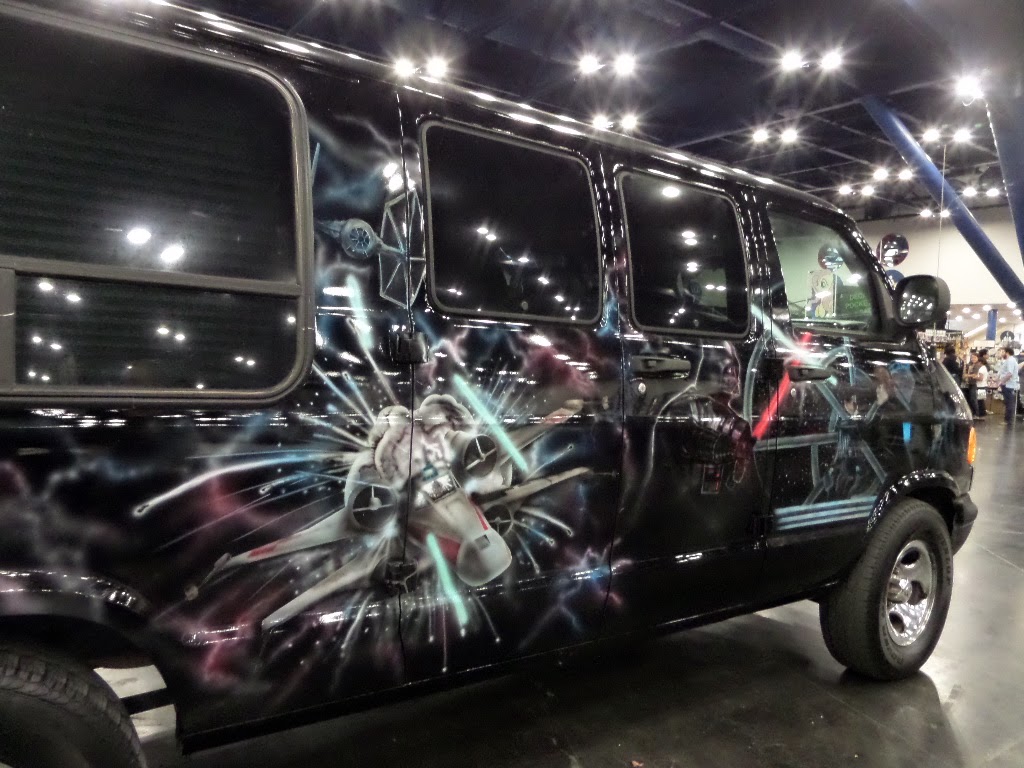 The Millennium Falcon could've used a paint job like this! 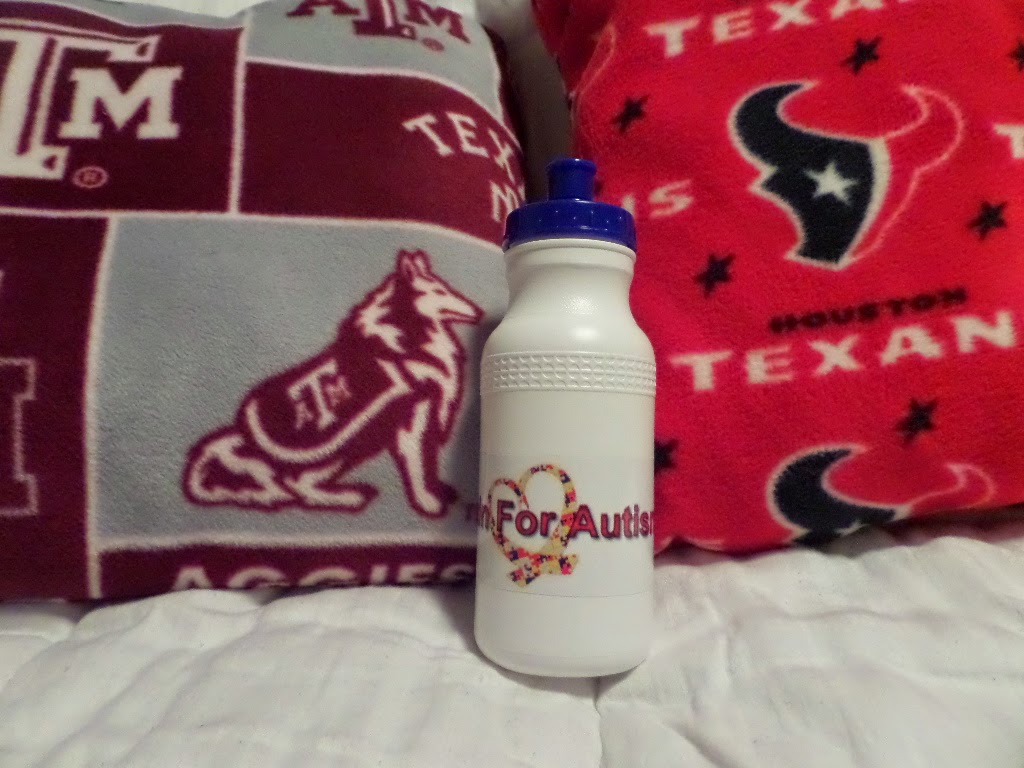 Spending too much money at conventions is easy, but I was honored to help support Bustin For Autism in some small way by buying these hand-made pillows. 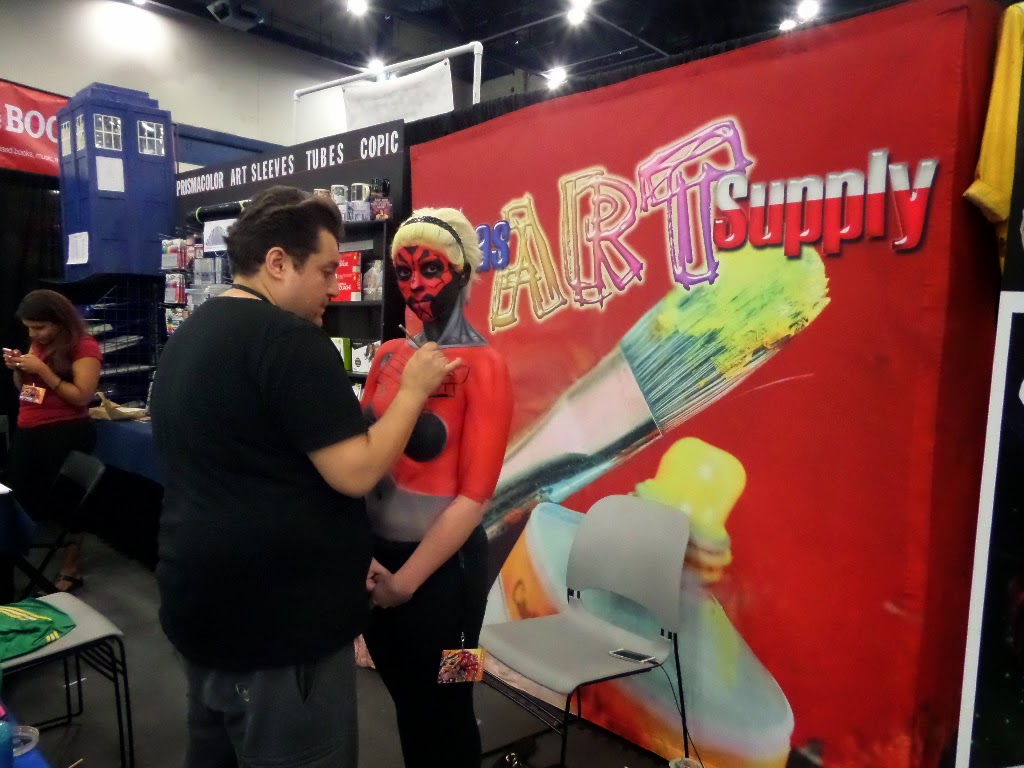 It's great seeing local businesses there as well, such as the Texas Art Supply. How cool is this body painting?! 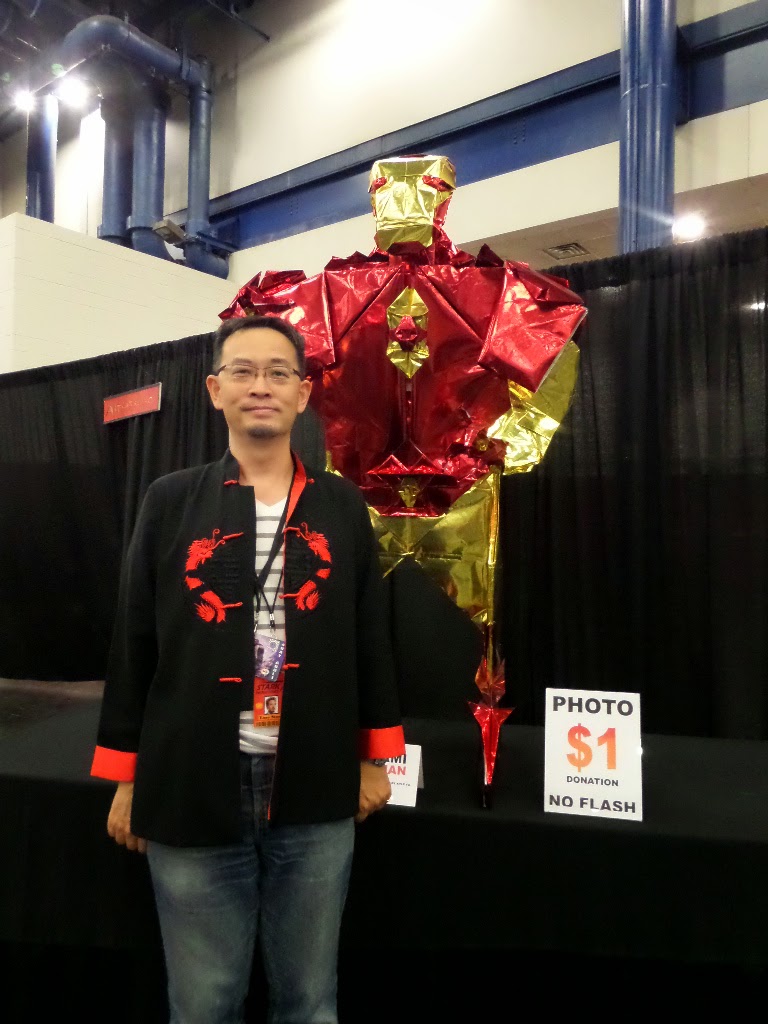 Comicpalooza has more artists than you can count, but have you ever seen life-size origami action heroes? Here is Master Origami Artist T.J. Fu standing by one of his amazing creations. 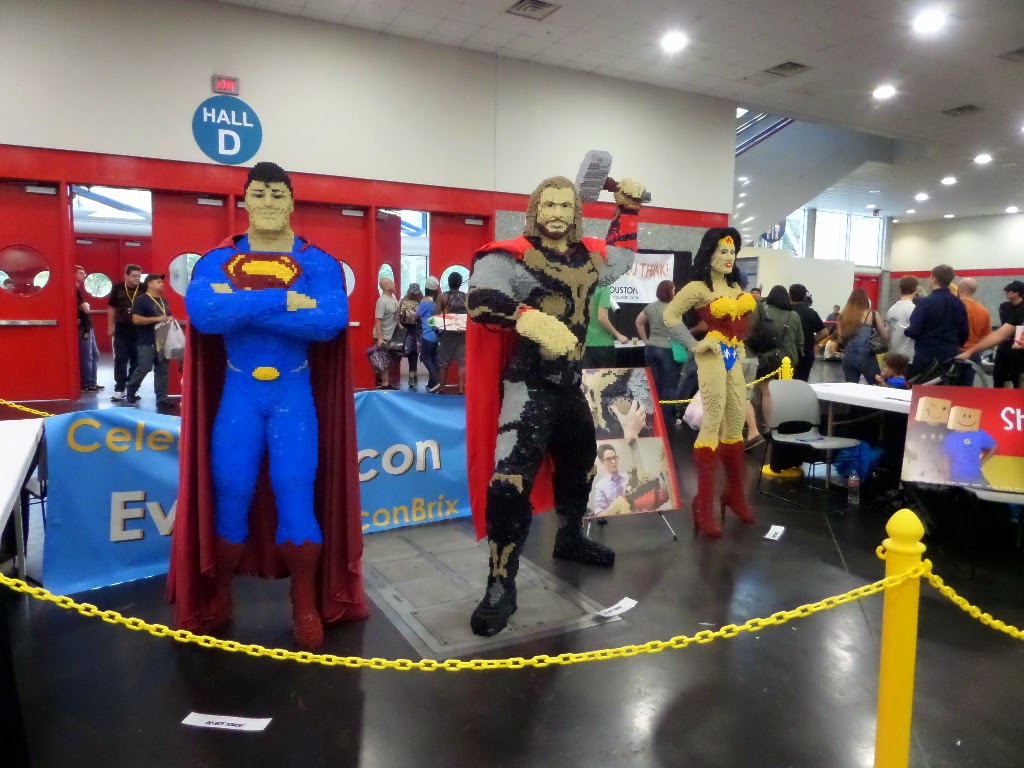 Over all it was a fantastic four days in Houston. I can't wait to see what next year brings.
Posted by Author Missy Jane at 8:48 PM No comments:

Email ThisBlogThis!Share to TwitterShare to FacebookShare to Pinterest
Labels: appearances, Comicpalooza, conventions, Houston, panels
Newer Posts Older Posts Home
Subscribe to: Posts (Atom)
*All photos used on this blog are either my own original photos or ones I have personally gained permission to use from the photographer or from the model who in good faith has told me he/she has ownership of their photos. No photo on this blog can be used without express permission from myself or the owner of the photo(s).*