Cover Reveal: Born of the Forbidden 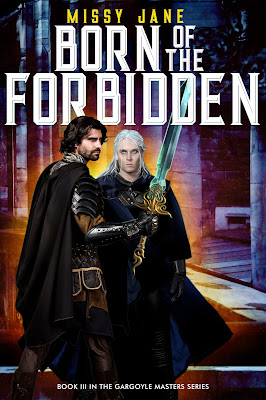 Happy Valentine's Day! As my special treat to my readers I'm revealing the cover for my soon to be released third installment in the Gargoyle Masters series, Born of the Forbidden. The tentative release date is March 13th, but I'll post on social media as soon as that's set in stone. Thank you to the amazing Kanaxa for another gorgeous cover!
Blurb:

Some desires are too strong to be denied.

Master Steinn is loyal to his brothers, his King, and his people, but his desire for another man is leading him into unchartered territory. As a Master Gargoyle he protects the realm, but did he inadvertently bring on a threat from the Varish with his taboo encounter? Despite being made of stone, the strength of his feelings for Zephyr may be more than he can fight.

Brónach’s gift of foretelling is often a curse. The jumbled images she dreams aren’t usually helpful, but this time the danger is clear. Relaying the message is the easy part, the challenge comes in ridding herself of the one gargoyle who stops her heart. Adalstan has no clue she’s desired him for years. Now she finally has his attention at the worst possible time. Will he hate her once the full foretelling is revealed?

Twelve brothers turn to stone to protect the human realm, but they can’t protect their hearts once they find the mates who call to their souls. As they battle the unexpected feelings within, a battle wages in their city, a prophecy comes to light, and the fate of the entire continent is at stake.

Posted by Author Missy Jane at 6:00 AM No comments:

Email ThisBlogThis!Share to TwitterShare to FacebookShare to Pinterest
Labels: fantasy romance, gargoyles, new cover, Valentine's Day
Newer Posts Older Posts Home
Subscribe to: Posts (Atom)
*All photos used on this blog are either my own original photos or ones I have personally gained permission to use from the photographer or from the model who in good faith has told me he/she has ownership of their photos. No photo on this blog can be used without express permission from myself or the owner of the photo(s).*