Spotlight on In Too Deep 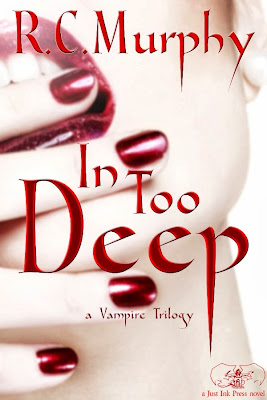 From the author of Enslaved, Just Ink Press brings you R.C. Murphy's vampires in her latest book, In Too Deep, the second in her vampire trilogy. Watch out for those Council Elders! They're a pretty nasty bunch.

NOTE: In Too Deep is paranormal horror with a touch of romance and graphic details when it comes to the horror aspect.

Blurb:
Meghan Sterling—CIA agent.
For six months, she's been living in Central California under the name Clara Osbourne—and not by choice. The Cold War is over; however, she's still tasked with infiltrating a potential cell of Russian sympathizers, possibly ex-KGB operatives. The CIA has heard they've found a way to render the vast agricultural hub of Fresno, California useless, tainting the produce as well as beef, milk, and poultry produced in the county.


The problem is, the CIA has Meghan following the wrong group. She doesn't realize their mistake until she's already in too deep and working with Jarlan and his partner, Rich, in what she thinks is a security company guarding Emerald Produce. She'd never have guessed they were vampires. Until Jarlan forgets she's off the lunch menu and attacks.


Meghan helps Jarlan control his bloodlust, but she can't ignore her duty to her country. Someone in California wants to wreak havoc on the economy and food supply. If it isn't the vampires, then who is it?

Fog in California’s Central Valley was a creature not to be trifled with. It swallowed up buildings, cars, and people without a second thought. The fog took more lives than automatic weapons. A trickster on par with Loki, it manipulated distances, making people believe they had plenty of time to slow down, when in actuality they were seconds from becoming intimate with the rear bumper of a semi truck. Surviving the fog was the most difficult part of life in the valley. Or so Meghan thought.

Meghan Sterling tugged the scarf around her neck tighter and tucked the ends into the too-big uniform jacket hanging off her shoulders. Cold crept in on the heels of the fog. The warehouse parking lot she patrolled was damp, freezing, and didn't make her job any easier. Whose brilliant idea was it to become a security guard? She cursed and shoved her gloved hands in her pockets. It was time to make another pass around the back quarter of the property. Whoop-dee-doo. More weeds and fog. And being forced to deal with the two men stuck working the graveyard shift with her.

Walking with her chin tucked into her scarf, Meghan made her way to the rear of the massive warehouse. Why farmers were so protective of a warehouse full of oranges, she had no clue. The money paid her expenses, but it wasn’t worth the frostbite and vampire-like work hours. She’d need a month-long vacation on the beach when the job was finished.

“Let’s grab a bite to eat,” a male voice said from around the corner of the warehouse.

Meghan stopped before she stepped into view, listening to her coworkers, despite the lack of movement, which made her colder. She had no desire to trade not-so-witty banter with them any time soon. They were okay on the eyes, actually possessed brains, but ran out of non-manly things to talk about after five seconds in her company. She couldn’t make herself pretend to be interested in the Superbowl.

“All you think about is your stomach, Jarlan. Give it a rest. We’re not done here. You can eat on the way home.”

“I’m tired of fast food. When’s the last time you sat down to a nice warm meal, Rich?”

“Too long to remember, but we agreed to this job. We can’t leave Clara to watch the place by herself.”

Jarlan laughed. “She’d piss herself watching shadows if she knew the truth.”

Meghan held her breath. Six months of lurking and waiting were about to pay off. She tucked in closer to the warehouse wall. The heel of her boot caught a pebble and ground it into the asphalt. The noise was deafening to her ears. This is why I’m not a ninja.

Cover blown, she plastered a smile on her face and stepped out to meet them near the back door, measuring her pace so it didn’t look like she’d been listening in. “Have the oranges turned into man-eating monsters yet?”

Rich shook his head and grinned. “No, not yet. All’s quiet here. What about the front, Clara?”

Meghan rolled her eyes, afraid for just a second they’d stick from the cold. “Not even a roach. What’s the point of babysitting produce at three in the morning?”

“Money.” Jarlan clapped Rich on the shoulder with one of his massive hands.

Could the guy be any bigger? He should be in the WWF, not in the middle of nowhere California. Then again, if he was who she thought he was, his size had a purpose. She needed to keep an eye on him.

“Money isn’t everything, friend.” Rich tucked a strand of his long brown hair into the knit cap pulled down over his ears. “We’re almost done for the night. Will you be okay by yourself until dawn?”

Nodding, Meghan waved them off. “Nothing ever happens out here. If something does, I’ll eat my boots.”

Jarlan’s hazel eyes fell to her feet. “Not much leather there. You’d have better luck getting a full meal out of a rat. They’re big enough out here, away from the city.”

Rats? Meghan had been trained to face a lot of things, but rats made her skin crawl with their naked tails and sharp teeth. Out in the sticks, they were the size of cats. She stole a look around the employee parking lot. Something skittered over the pavement near the eastern fence line. Her shoulders tensed. Please, don't let it be a rat. She'd much rather face anyone stupid enough to cut the fence with three security guards standing in eyeshot.

A leaf tumbled into the jaundiced light puddled on the asphalt. Meghan shook her head and rolled her shoulders to shake off the tension.

The big man laughed. “Try not to bludgeon any foliage to death while we’re gone. If something posing an actual threat does come along, use the phone in the guard’s office. Stay out of the warehouse. Without the code, you’ll send an alert to the police and I’ll be stuck doing enough paperwork to level a forest. Take care, Clara.” 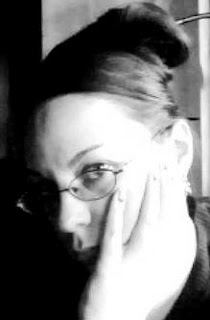 About the Author
R.C. Murphy spends her nights writing urban fantasy novels and a slew of short stories for her blog, The Path of a Struggling Writer. By day she is a not so mild-mannered housewife, wrangling vampires, demons, and various other nasty creatures. R.C. has joined forces with fellow writers, artists, and actors to form the Zombie Survival Crew where she reviews movies, TV shows, as well as penning articles on important survival skills.
Blog | Twitter | Facebook | Zombie Survival Crew | Just Ink Press
Email: RC.Murphy5150 (at) gmail (dot) com

Posted by Author Missy Jane at 10:00 AM No comments: 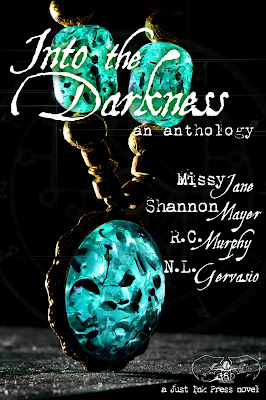 It's release day! And for the first time I get to share it with three other authors. I'm in a new anthology out today from Just Ink Press called Into the Darkness. This is something kind of different from my other work, a short story that is more paranormal than anything else. There isn't exactly a romantic thread and definitely no hot sex in this one, but I hope y'all like it anyway. ;-)

Ignorance is Bliss by Missy Jane

Discovering your boyfriend has been unfaithful is never easy, but for Natalie it’s a complete shocker. As if his confession of infidelity isn't bad enough, suddenly everyone she meets is telling her their deep, dark secrets. She soon realizes the trinket she bought at the flea market is more than a harmless lump of metal. Now she has to decide if always knowing the truth is worth the heartache or if ignorance is truly bliss.

There are also three other stories by three fabulous authors: Shannon Mayer, R.C. Murphy, and N. L. Gervasio.
So, what are you waiting for? Go forth and get your copy here!
Posted by Author Missy Jane at 8:00 AM No comments:

...he wasn't my child. I'll bet he didn't even consider himself a "child". But I considered him one of the many I interact with on a daily basis. I'm a server in the cafeteria line at a high school and today one of our students was killed. He was stabbed by another student who also stabbed three more. Now everyone wants to know WHY? Does it matter? I want to know HOW? How can this child have so little regard for human life, including his own? How can he reach his teens without learning all life is precious? How can he have not known or cared about the consequences for everyone involved? How can this keep happening in our schools, with our children?

The only thing that kept me sane through the entire ordeal was knowing none of my children were on that campus. They all attend other schools and I was the only one of us there. I was in the kitchen, in the back preparing lunch when it happened as breakfast was ending. Today will be a day I never forget no matter how hard I try. Many parents' knee-jerk reaction is to want to pull their kids from this school, but where would they go? Where is safe? Past incidents up north have proven even the smallest, quietest, most affluent communities can be attacked by a person intent on killing innocents. It sickens and infuriates me in equal measure.

So I'll hug my girls more tightly tonight. I've already reminded them to always run the other way when they see or sense a confrontation. I've warned them not to stop to take photos or videos. Their life isn't worth a damn twitter pic. There's no school the rest of the week but we'll be back to it on Monday and the memories will last my lifetime.
Posted by Author Missy Jane at 7:19 PM No comments: 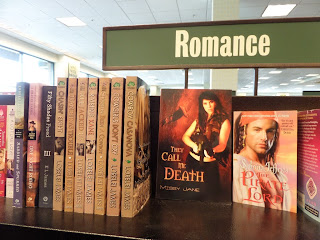 September has arrived and with it almost nothing on my writing calendar. I don't have any signings, releases, guest posts, etc, scheduled so far this month. But that's probably a good thing since I'm still trying to get used to my new work schedule. I do plan to attend Kerrelyn Sparks' signing at Murder by the Book at the end of the month. I also will be preparing for the JDRF Walk for  Cure. So don't worry, I'm not going to be completely silent this month.

If you'd like to meet me, make plans to attend Readers n' Ritas in Allen, TX in November. I'm hoping to have a new book out by then but I don't have a release date for what's in edits right now yet. I'm working on some hot stuff for Ellora's Cave and just finished edits for my part of an anthology from Just Ink Press. The first release in my gargoyle trilogy is also in edits with Entangled.

What do you have cooking in September?
Posted by Author Missy Jane at 12:15 PM No comments:

Email ThisBlogThis!Share to TwitterShare to FacebookShare to Pinterest
Labels: miscellaneous, update, writing life
Newer Posts Older Posts Home
Subscribe to: Posts (Atom)
*All photos used on this blog are either my own original photos or ones I have personally gained permission to use from the photographer or from the model who in good faith has told me he/she has ownership of their photos. No photo on this blog can be used without express permission from myself or the owner of the photo(s).*