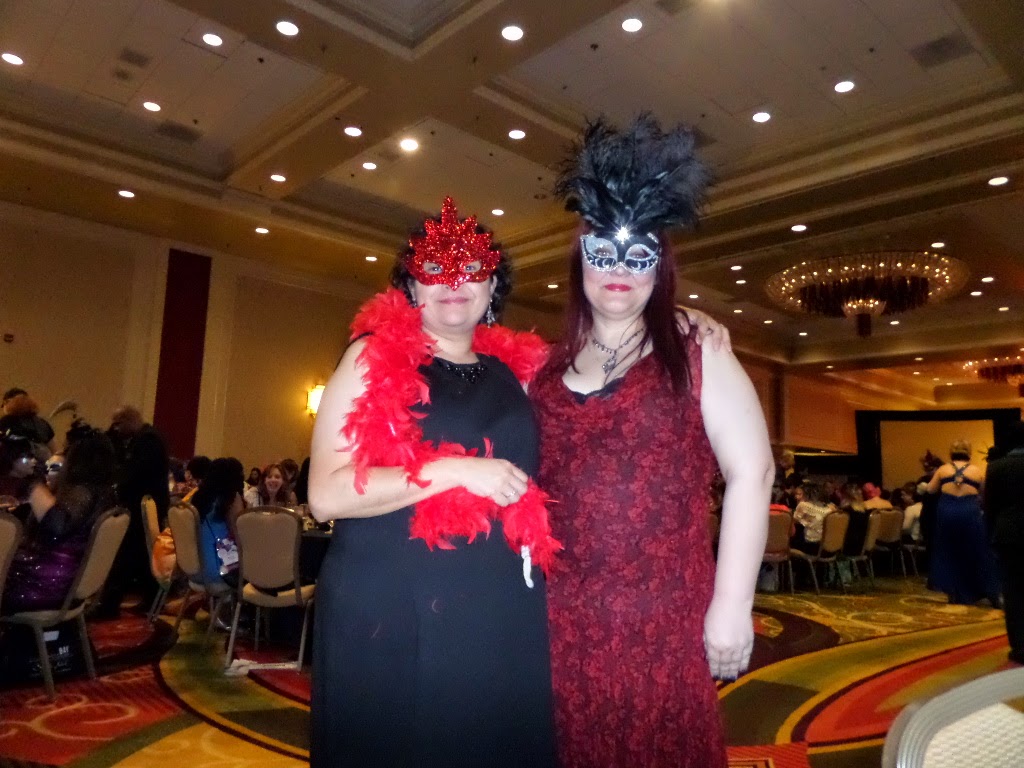 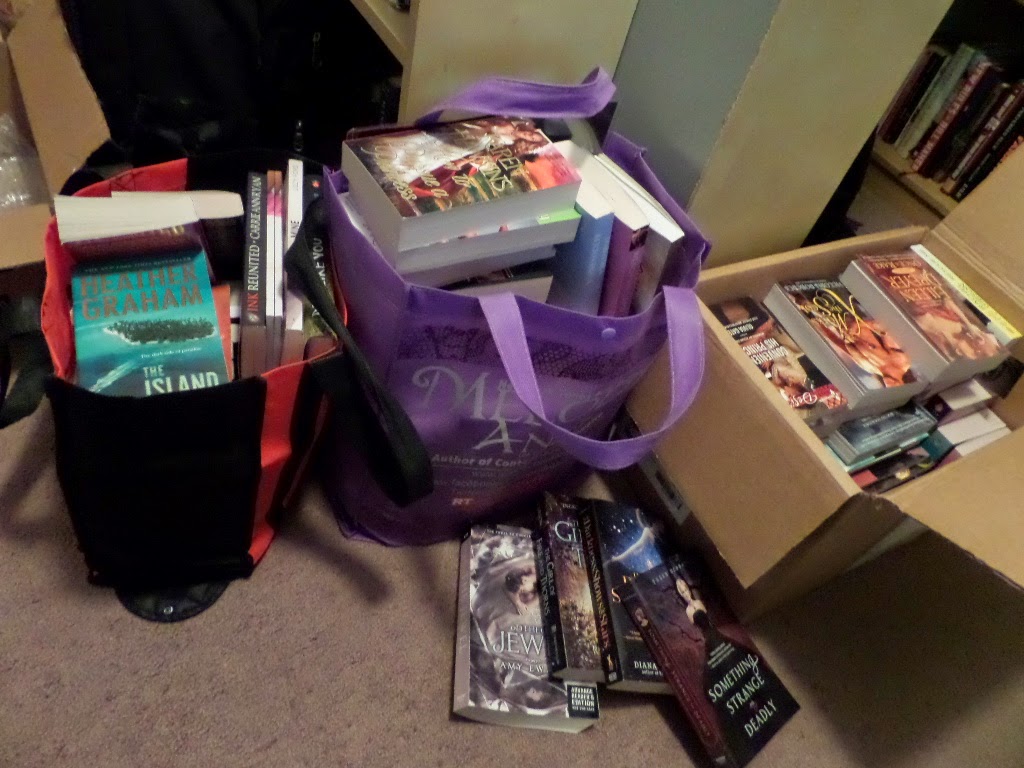 So unless you've been under a rock (or offline) the past couple of weeks, you know by now that I went to New Orleans recently for the Romantic Times Reader's convention. It was five fun-filled days of books, cover models, books, drinking, books, swag, books, authors, books, readers, books, beads, and did I mention books? 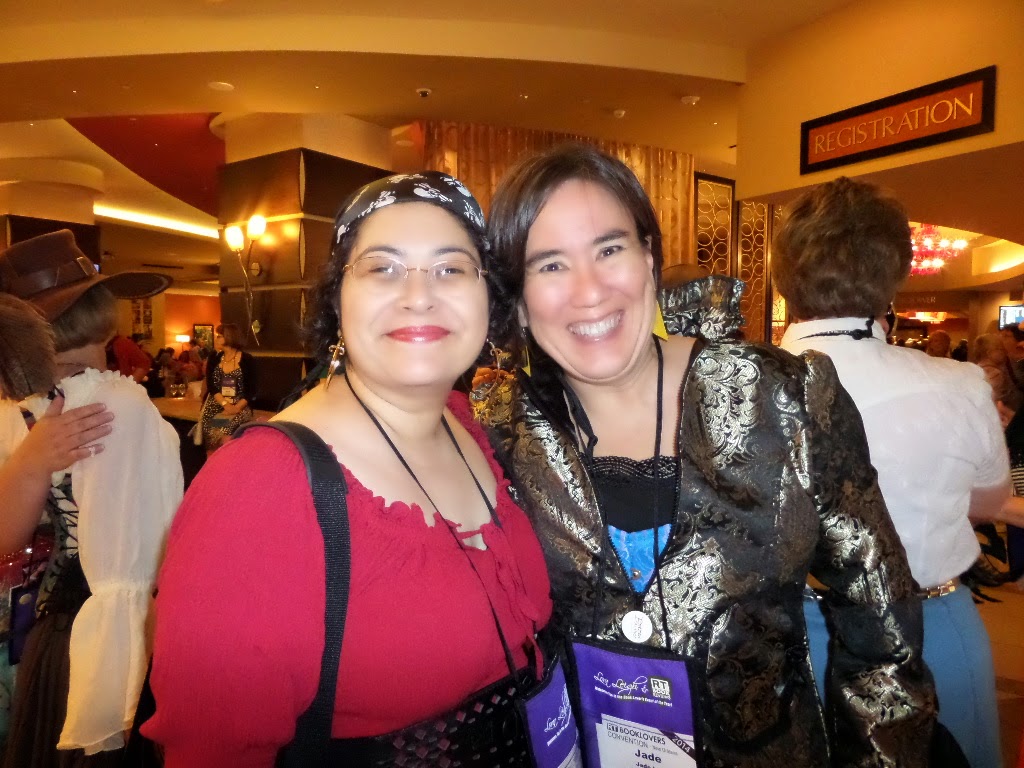 One of the first authors I ran into was Jade Lee (aka Kathy Lyons) whom I absolutely LOVE! She makes every event unforgettable and is one of the nicest people I know. 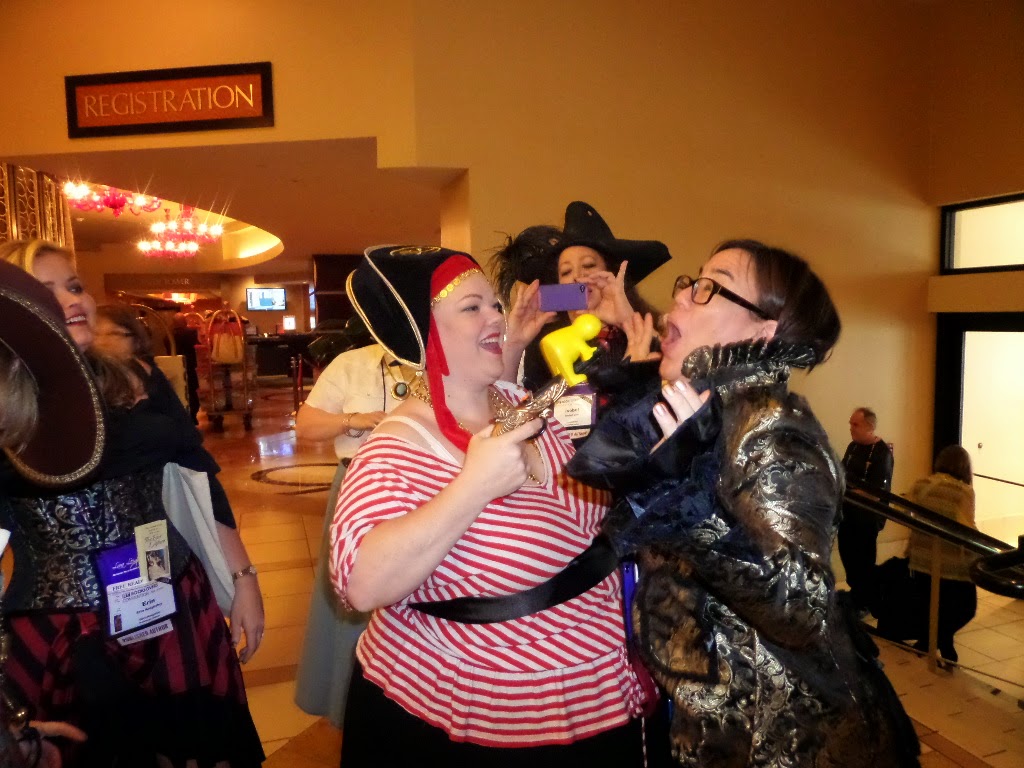 Any time spent with Jade is guaranteed to be a good time. 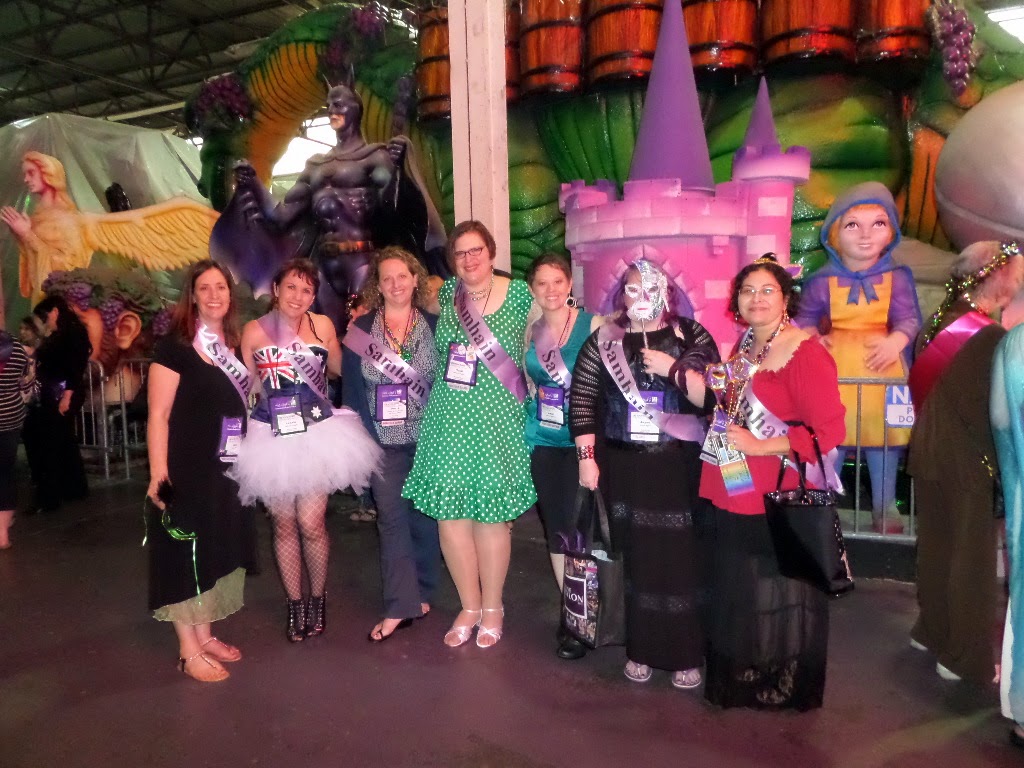 One of the major events was a Mardi Gras 'parade'. Authors stood on the floats in the warehouse where they're stored as the crowd walked down the aisle between them. Throwing out beads was a awesome! 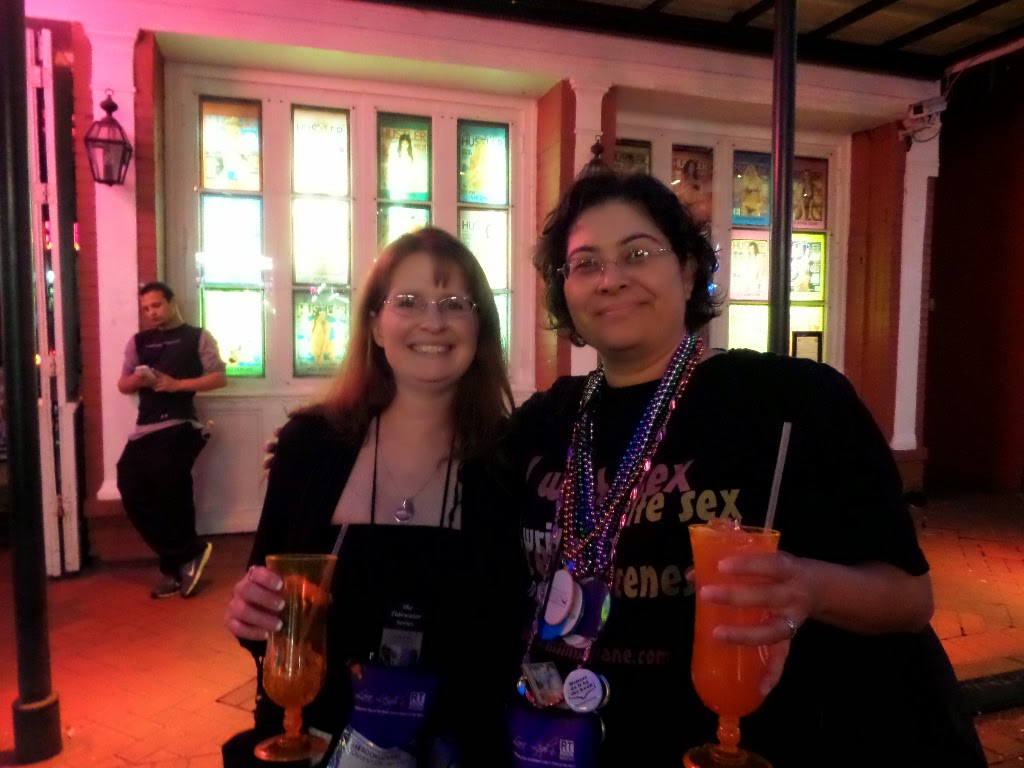 No trip to NOLA is complete without a pub crawl down Bourbon Street. There were ten bars being hosted by various publishers and most of them were handing out free drink vouchers. Yeah, I got a little (ahem) inebriated. 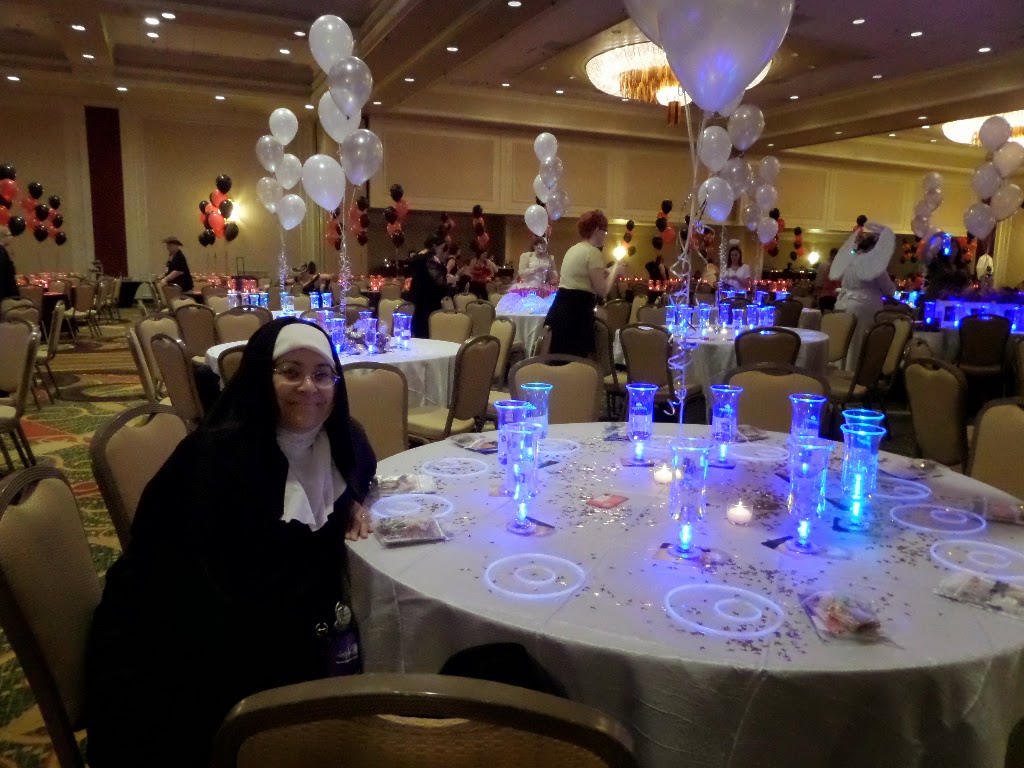 Directly after the pub crawl was Samhain Publishing's Saints and Sinners party where I hosted a table as a drunk nun (oops!). It was a lot of fun meeting the ladies who joined me at my table. One of them traveled all the way from Thailand. 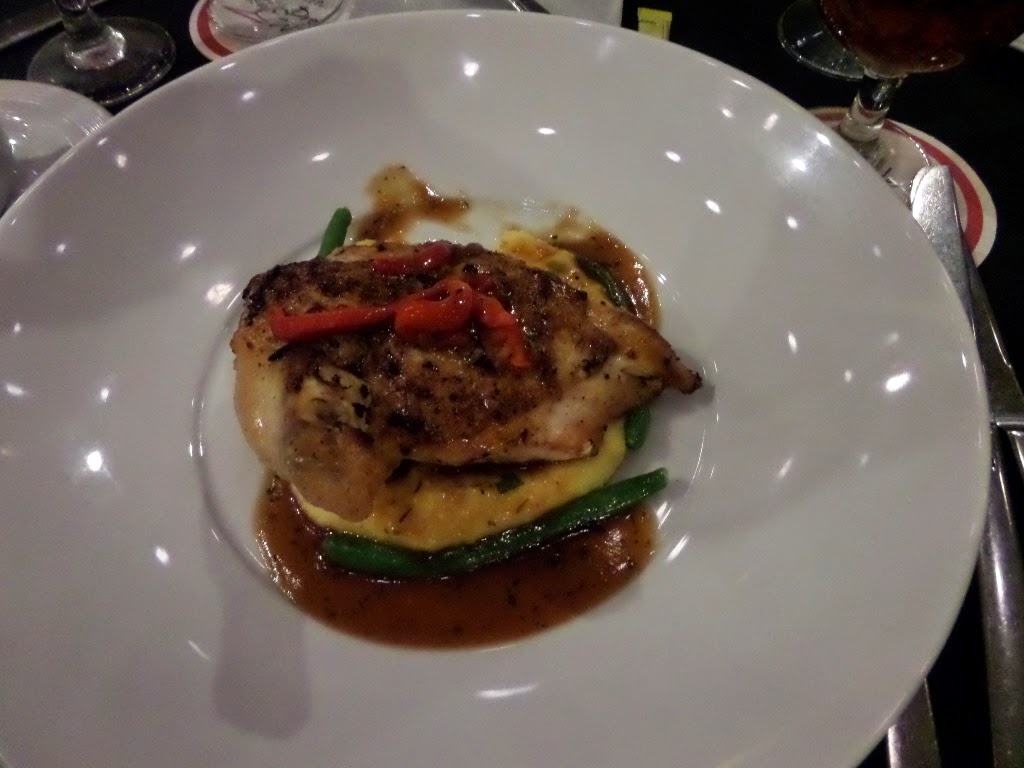 I didn't take nearly as many food shots as usual because I kept forgetting to do it before digging in. This was the chicken served at Heather Graham's Mrdi Gras Magic and Mayhem dinner and dance party. 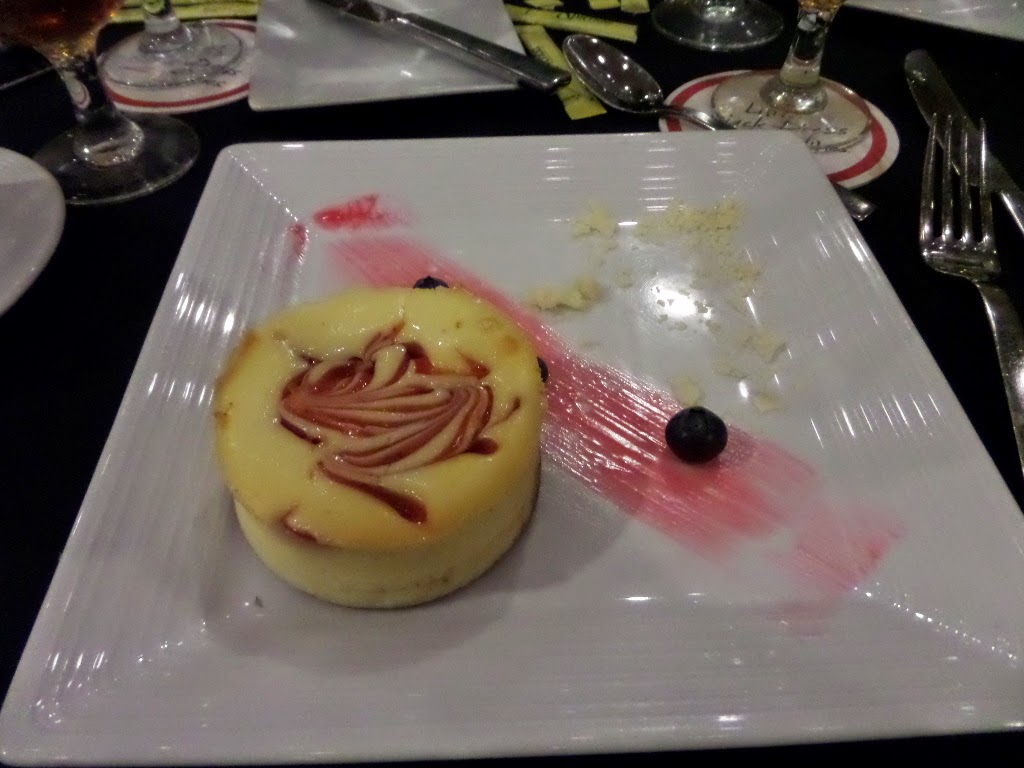 Beignets abounded throughout the event, but cheesecake is always a good choice too. 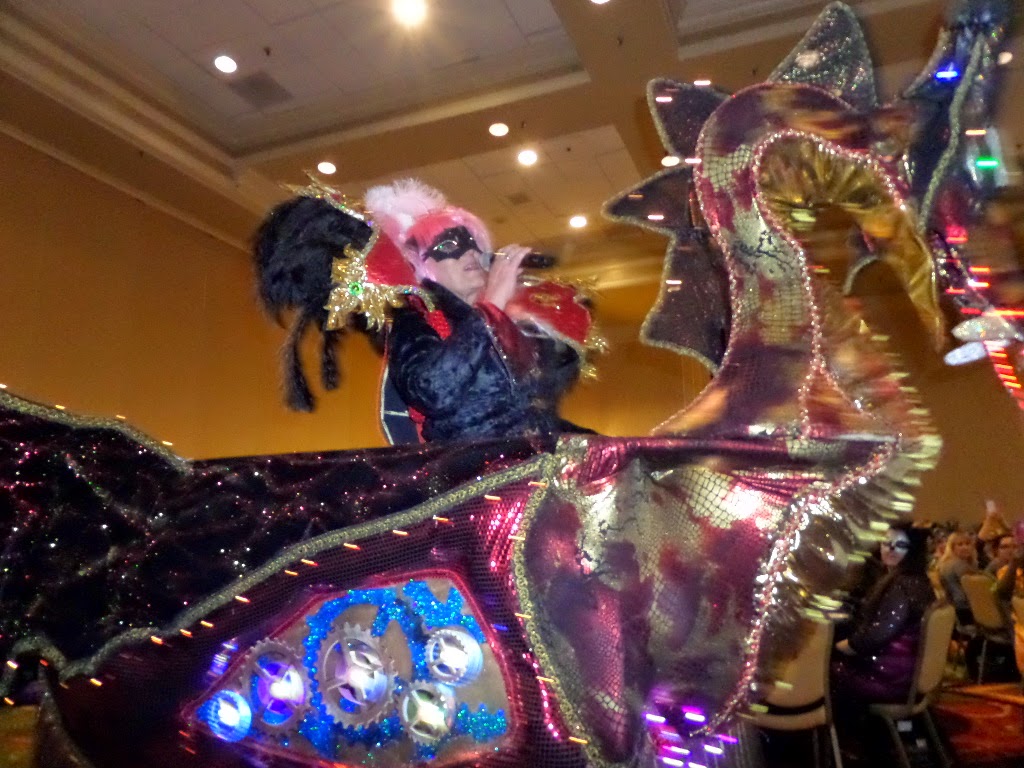 There were lots of beautiful and creative costumes, including Heather herself on her very own dragon float. 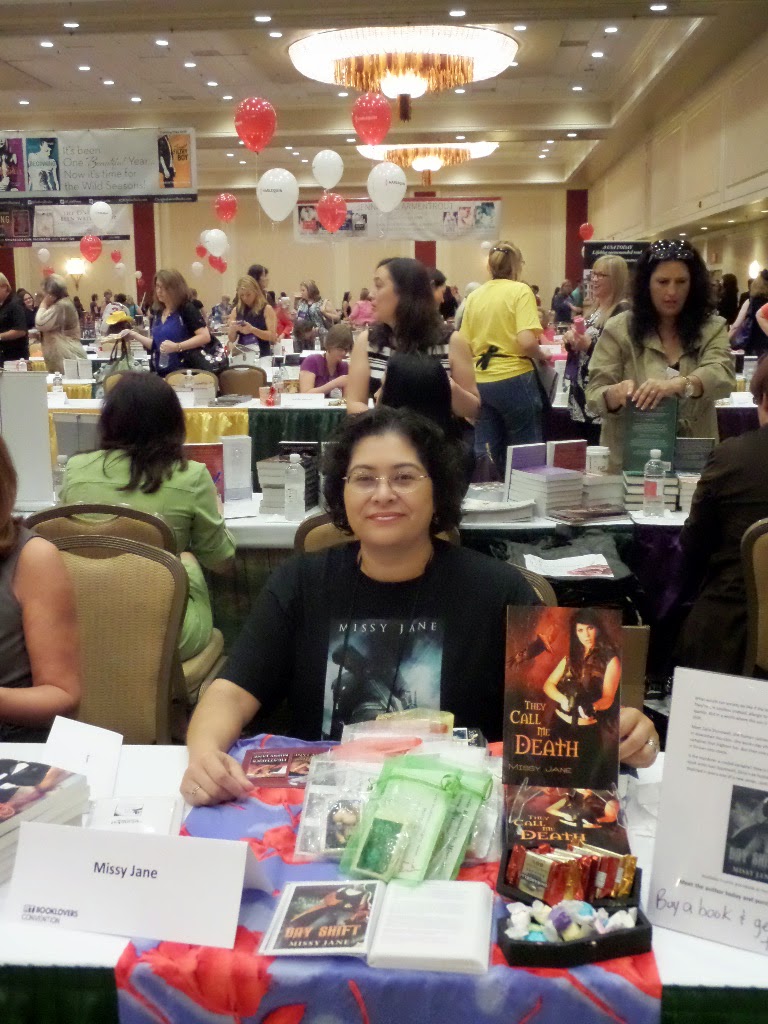 One of the biggest draws for readers is the giant book signing. I was honored to be in a room full of so many talented people. Sitting next to Kelly Jamieson was a blast!

And last but most certainly not least, I got to meet some of my favorite authors: 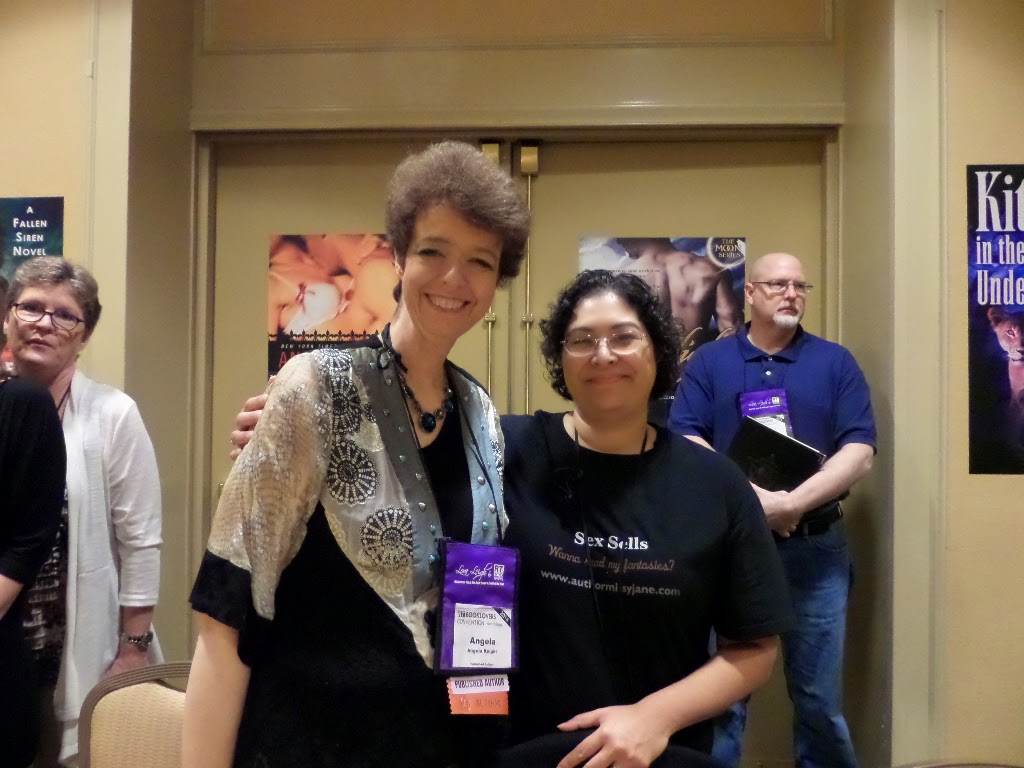 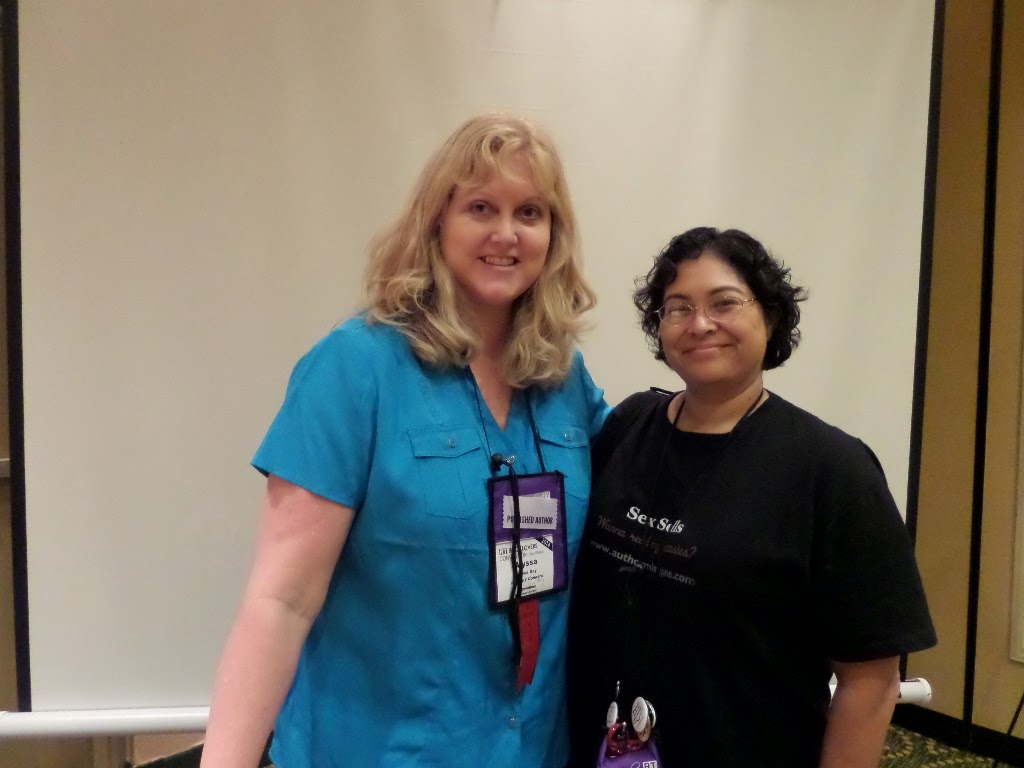 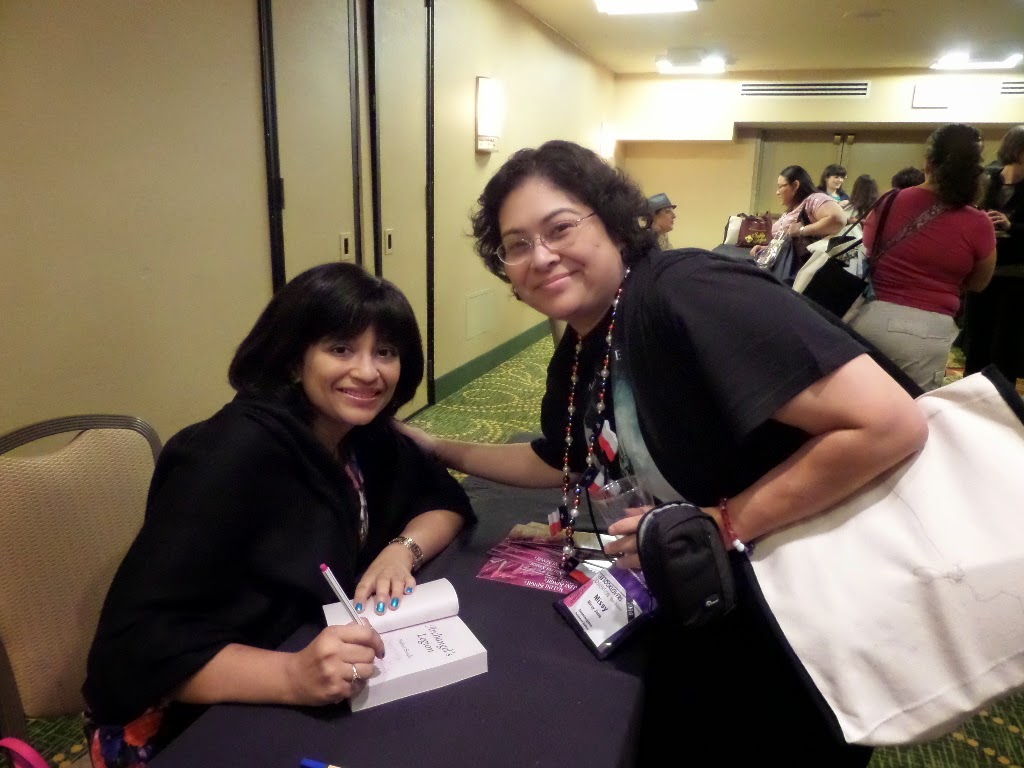 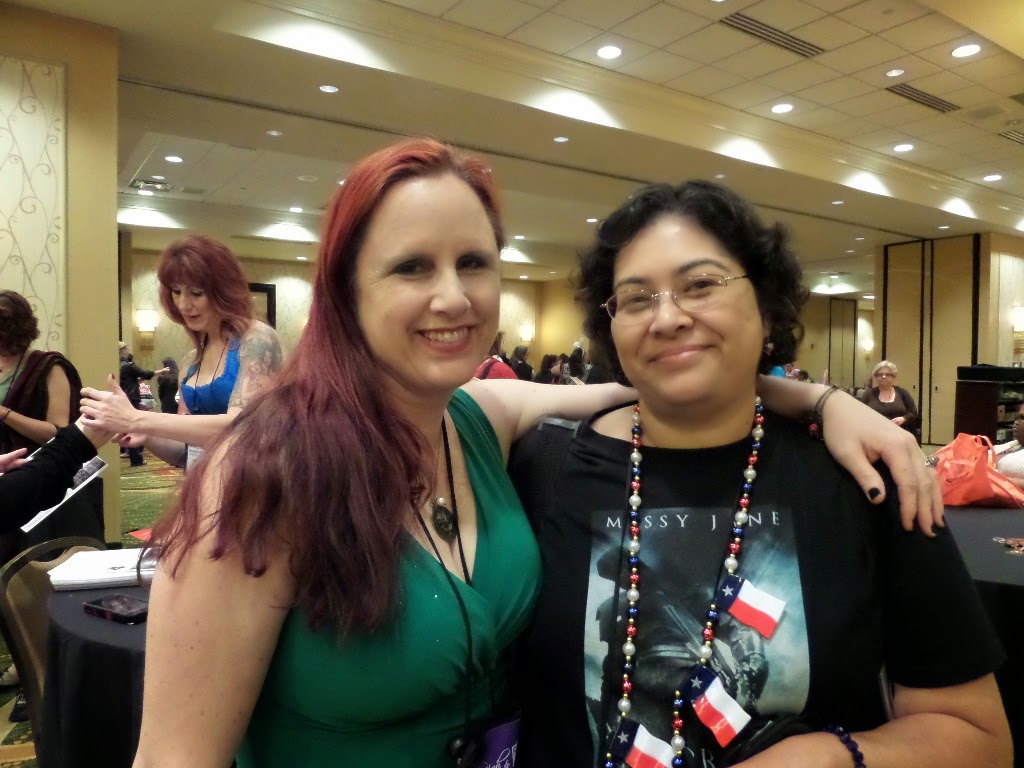 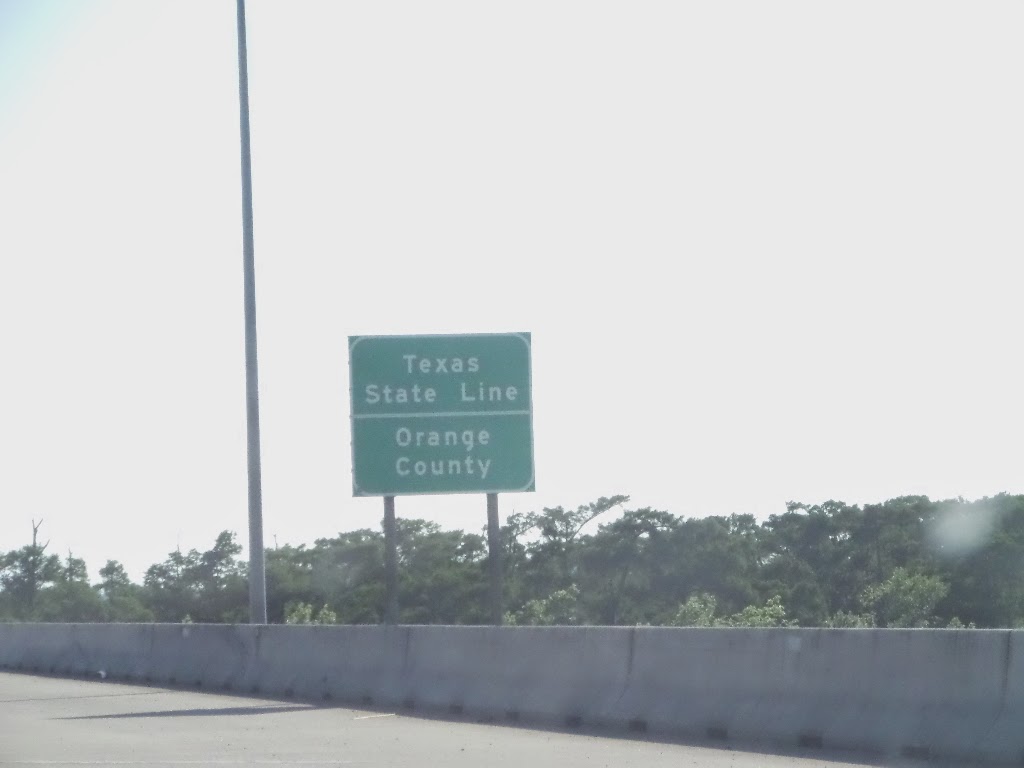 And many others where I missed my photo op. Over all, it was a great time and I plan to attend again next year when it's here in Texas. I hope y'all will join us in Dallas.

Posted by Author Missy Jane at 11:58 PM No comments: 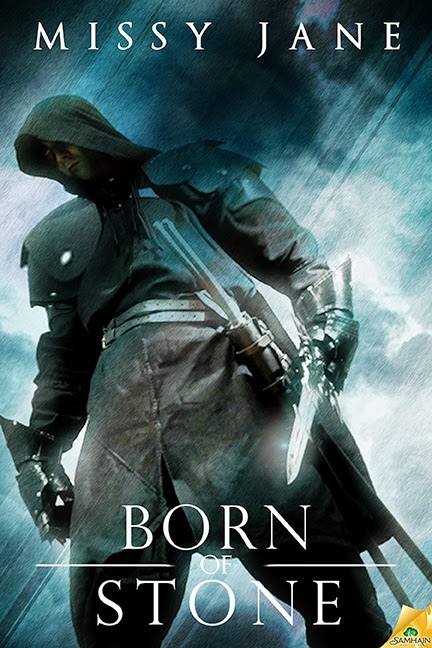 Today is release day for my newest book: Born of Stone! This is the beginning of a romantic fantasy series about Gargoyles...and the women who love them.

Within a body strong as stone beats a heart ready for love.

For seventy years, Orestes and his eleven gargoyle brothers have done their duty to protect King Kadmos’ realm. There’s only one annoyance in his life—humans.

He’s content to leave them to their idol worship. Until he notices a small, frail woman serving at his table, doing her best to remain invisible. Something about her calls to him like no human before.

Astrid is terrified. Not of the powerful magical creature with kind eyes, but of the staff overseer’s lash for calling attention to herself. Instead she finds herself whisked away to paradise, where she is bathed, fed, and made love to by Orestes as if she is his reason to live. But she isn’t naïve enough to believe she is anything more than a temporary diversion.

When Orestes is called away to search for a missing brother, Astrid is kidnapped by traitors intent on using her to bend Orestes to their will. Little do they know that the connection between them is no weakness, but a strength their enemies would be fools to  underestimate…

Warning: This book contains paranormal fighting, steamy sex scenes, strong-willed females, and men made of stone who prove to be soft as butter in the right hands.

Read an excerpt and buy it here: http://store.samhainpublishing.com/born-stone-p-73413.html

Posted by Author Missy Jane at 8:00 AM No comments:

Email ThisBlogThis!Share to TwitterShare to FacebookShare to Pinterest
Labels: fantasy, fantasy romance, gargoyles, giveaways, new release, paranormal romance, Romance, Samhain Publishing
Newer Posts Older Posts Home
Subscribe to: Posts (Atom)
*All photos used on this blog are either my own original photos or ones I have personally gained permission to use from the photographer or from the model who in good faith has told me he/she has ownership of their photos. No photo on this blog can be used without express permission from myself or the owner of the photo(s).*