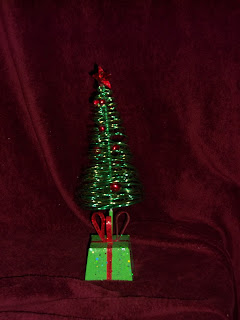 Merry Christmas, Happy Hanukkah, Happy Kwanzaa, Happy Humpday! Whatever you may be celebrating today, I hope it is joyful and fun. I hope you're with someone you love, or at least like a whole lot, and I wish you peace and goodwill.

My Christmas morning began at 5:01 am (the girls said let me sleep in an extra minute) and ended about 7:30 am for a quick nap. I'm awake again now and will be crawling back into the editing cave for a bit. If I don't check in again before next week, then I wish everyone a Happy New Year's too!
Posted by Author Missy Jane at 11:04 AM No comments:

Today is December 1st, which means NaNoWriMo has officially ended. Final word count: 35,016. So, no I didn't win again this year. But here is why I'm okay with that.

It's all about choices. I realized about a week ago that I still had a chance at winning NaNo if I really buckled down and got to writing. But what did that mean exactly? It meant doing almost nothing over my Thanksgiving Holiday break from work but writing. I'm a married mother of four. There's no such thing as doing nothing but writing in my life except in small hard-earned sprints. Sure, I could've been a real bitch and made it happen. I could've told my husband he had to make Thanksgiving dinner, and told my daughters there would be no shopping done until next weekend. There were plenty of opportunities for me to shove everyone who is important to me away and lock the door to my room so I could make the 50,000 word count by 11:59 pm last night. But no. That's not who I am.

Now, don't get me wrong. I wholeheartedly respect every single writer who made it. I could've been a lot better earlier in the month and not needed the crunch at the end. But honestly, that's just not how I write. I write when the mood strikes me at the same time I have a free moment. Yeah, that miracle combination doesn't always happen. So, I'll try again next year, and the year after that, and the year after that. Who knows. One year it could happen. For now I'll take my 35, 016 word manuscript and keep adding to it until I'm satisfied it's a finished product. I'll also have fond memories of Thanksgiving week from Black Friday Shopping, Christmas tree hunting, cooking Thanksgiving dinner, and overall spending time with my family.
Posted by Author Missy Jane at 2:19 PM No comments:

Email ThisBlogThis!Share to TwitterShare to FacebookShare to Pinterest
Labels: NaNoWriMo, Thanksgiving, writing update
Newer Posts Older Posts Home
Subscribe to: Posts (Atom)
*All photos used on this blog are either my own original photos or ones I have personally gained permission to use from the photographer or from the model who in good faith has told me he/she has ownership of their photos. No photo on this blog can be used without express permission from myself or the owner of the photo(s).*