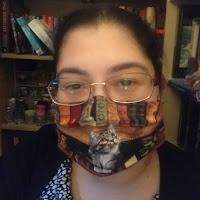 For every person on this planet, 2020 will be a year that lives in infamy. I honestly don't know a single person that didn't suffer in some way due to the pandemic, and all that it wrought. Today begins a new chapter in all our lives. Hopefully, a much more positive chapter. One we will be a little sad to see end this time next year.

In 2020 there were a few changes in my family. Daughter #3 decided to end her college career for now but stayed in Denton. Daughter #2 moved back home. Our son was officially renamed in the eyes of the state of Texas and we're still getting everyone else officially on board. My husband and I were able to work from home for a few weeks, but for the most part still had to go out in public every workday. We were lucky to keep our jobs and have not forgotten it for a second.

My son's box turtle disappeared, and I had to say goodbye to my beloved cat Cheetoh on the same day my son's tortoise died. At nearly the end of the year daughter #1's girlfriend's cat died of cancer. It was a rough year on us for pets.

In my writing life there were some positives. I finally finished book three of my Gargoyle Masters series. It's being edited and I already have the new book cover ready to go. I'm hoping for a March release date. I won NaNoWriMo for, I think, only the second time of my life, though I've been attempting it for many years. My long neglected blog saw a lot of activity from me in September because of a 30 Day Challenge hosted by Angela James that kicked my writing butt back into gear. Overall, it was the most productive I've been in a long time.

So, what about this year? Here are twenty-one things (in no particular order) that I'm looking forward to in this new year:

1. Empty Nesting. I love my children with a sometimes fanatical intensity that drives them nuts, but I've been taking care of them for nearly twenty-seven years. In the Fall we will be taking my son to Tulane University and beginning our Empty Nest days. Daughter #2 might still be living with us, but she'll be 24 by then and no longer needs me to the degree she did as a child. I'm looking forward to having a little bit more time for myself.

2. New Orleans. On that note, with our son in New Orleans for school we'll have a lot more opportunity to visit one of my favorite places to visit. We've promised him to remember to swing by and say hi while we're in town, lol.

3. In person book events. I might be overly optimistic, but I have at least four in-person events planned for 2021.

4. The first is All the Books in March in Houston. Hopefully, it will be safe enough to still have this event at that time. If not, the next is in May. Fingers crossed.

5. The May event is The Lone Star Book Festival.

6. Comicpalooza is expected to also make a return in Houston in May.

7. At some point Copperfield Books will reschedule it's Annual Author Fair.

8. In October, Authors in the Alamo City is expected to still take place.

9. Publishing new books. As stated above I will definitely be releasing the third Gargoyle Masters book this year.

11. Reading new books. With the new year comes new books from my favorite authors. One of the ones I'm most looking forward to is Wild Sign by Patricia Briggs. It's book 6 in her Alpha and Omega series which I highly recommend if you enjoy urban fantasy. Even if you're not sure, Patricia Briggs is one of the best story tellers I've ever come across. Well worth the read no matter which series you try.

13. Christine Feehan is releasing a new book in each of three of her series that are on my auto-buy list, and I honestly don't know which I'm looking forward to the most: Reckless Road, Lightning Game, or Shadow Storm.

14. Seeing family again. I'm really hoping by October it's safe to visit my mom. Since she lives in San Antonio I'm hoping to see her when I attend Authors in the Alamo City. Even if I have to put on a hazmat suit, I want to see my mom in person.

15.Travel. It might still be a while before it's safe to really travel and have a vacation somewhere, but we already know we're heading to Louisiana in August because of my son. He is also having top surgery this year which will necessitate a trip to Austin where daughter #1 lives. Then there will be those in-person book events. One is in Seguin, TX, which I've driven through more times than I can count. However, I don't think I've ever actually stopped there. It will be nice to road trip again.

16. New cat? When our son leaves for college he will be taking one of the cats with him. Claire really only loves him and barely tolerates the rest of us, so she gets to go to Tulane too. That means Jessie will be all alone in our house during the workday. So, we will most likely look into getting her a companion shortly after Claire leaves for college.

17. Eating out. Though we've continued to order food from area restaurants in order to support them, we haven't eaten in a restaurant in a while. There was one breakfast we attempted in an outdoor courtyard a month or so ago where we were attacked by bees. I told my husband it was a sign that we should've continued to get our food to go. I'm looking forward to being able to sit in a restaurant again. Hopefully it will happen this year.

18. Movies, and other indoor entertainments. Will we be able to safely watch a movie in a theater in 2021? I hope so. I'm honestly more concerned with going to a musical performance or play. No matter what it is, I truly hope it's safe to support the arts in person this year.

19. Camping. Before our rainy camping trip in December it had been many years since we'd loaded up the tent and headed into the woods. We all missed it. Being that it's one of the safe things we can do during a pandemic, I'm looking forward to more camping in 2021.

20. Photography. I've been taking photos since middle school when my father bought me a Canon AE-1. It's a hobby I haven't indulged in much the past couple of years. However, I plan to take my DSLR with me a lot more in 2021. There are so many great photographs I've missed because the phone is not always a great substitute.

21. Everything. 2020 was such a dumpster fire that there's just nowhere to go but up at this point. If you follow my social media you know where I stand politically. I can't wait for Biden and Harris to take office. I'm almost giddy with relief at the thought of the changing political climate in the US that is coming. I know things aren't going to improve overnight, but it's definitely a step in the right direction.