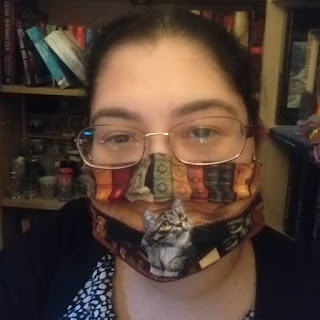 It's Sunday, a day I've trying more and more to stay off social media to attend to other things. Though I consider myself "Christian" I'm not a church-goer, but everyone deserves a day of rest and social media can be downright exhausting.

I'm most active on Twitter these days, I think because of the faster pace. I tend to log on while I'm at work during the week because I have a lot of down time and I can take a peek at what the online world is talking about fairly quickly. But being on Twitter is a double-edged sword. It's a great way to let people know about my books, talk to bibliophiles of all genres, and get great writing advice. However, it can also be a pitfall of hate and negativity. Politics aside, there can be some really unpleasant people on Twitter which is why they allow you to block and mute accounts that you don't want to engage with or read posts from. So, what do you do when someone you want to engage with blocks you? The short answer is, absolutely nothing. Trying to engage with someone who doesn't want to engage with you will only lead to trouble no matter how you look at it. This isn't something I usually worry about, but I have to admit that finding out I'm blocked by someone I want to engage with is unpleasant.

So what happens when someone you've never engaged with, or even knew of before, blocks you? Again, nothing really. Twitter is just an online platform not an arena full of people that you can touch and see. Most people don't have a real photo of themselves or use their real names. It's all superficial and shouldn't be an emotional thing at all. However, it can be. Not long ago the Romance Community was talking about an author that many people engage with and learn from but it wasn't anyone I had ever heard of. I clicked on the link to learn more about them and instead realized they had blocked me from seeing anything at all. I have to admit, I was really taken aback. If this person is so highly regarded and doesn't want to even know I exist, what does that say about me?! In essence, nothing at all. It could be that at some point I Tweeted, Retweeted, or even just liked a post that this person disagreed with enough to warrant them never wanting to engage with me. And that's perfectly fine. That's exactly what Block and Mute are meant to do. But it honestly took a couple of days for me to get past it because of how highly regarded this person is in our Romance Community. The worst part to me is not being able to make amends or explain myself because I have no clue why I've been blocked. But the truth is it really doesn't matter. I had never heard of this person before which means we probably have nothing in common other than being in the Romance Community. And that's fine because as individuals, there's no way all of us are going to get along.

For a lot of creators impostor syndrome is a very real, very harsh malady that we fight against every time we attempt to create. Social media can be both a hindrance and a life preserver. If you get positive feedback online it helps to realize that yes, maybe you can do this creative thing you've set out to do. But negative feedback (including being blocked, muted or ignored) feeds into that doubt that nags at the backs of all our minds when we have the audacity to try creating art. If this ever hits you just remember that social media is completely voluntary and not necessarily reflective of reality many times. It's okay if some people don't want to engage with you because there are others who do. No matter what you put out there, someone wants and maybe even needs to see it. Be your own best audience and keep creating.

If you'd like to engage with me online, I can be found here:

Facebook feel free to send me a friend request, or to just know about my books/events like my Page

Instagram mostly pictures of my cats & food I've cooked or am about to eat, but occasionally books too