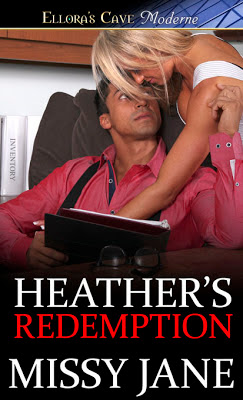 It's my birthday!! And what better way to celebrate than with a new release. Heather's Redemption, the sequel I never expected to write, is now available from Ellora's Cave Publishing. It's my tenth release from one of the best publisher's in the world. So, to celebrate I'm giving away a $10 virtual gift card. Just click this link to enter. One way to enter is by leaving a comment on this blog post.

Heather's Redemption is the story of a successful HR company VP. She seems to have it all, a great job, an influential family, skill, determination, and a killer body. However, what many don't see is the turmoil going on inside. Heather's poor choices cost her father's company a valuable employee and nearly caused a law suit. Now she has to be very careful of anything she does in the office as it concerns the opposite sex. Imagine her dismay when very sexy Zachary is hired.

Not mixing business with pleasure is easier said than done when working twelve-hour days at her family business. However, after Heather’s recent office affair ended in disaster, she’s determined to stick to her guns and ignore her attraction to the new guy, Zach. No matter how deliciously tempting he may be.


Zach knows falling for Heather Wellington is professional suicide, but resisting the intriguing and intelligent beauty is much harder than expected. She’s quickly proving to be everything he wants in a woman, despite the rumors circulating about her past. And once he touches her, all bets are off. Now all he needs to do is prove to her she’s worthy of a second chance and more than capable of redemption.

Posted by Author Missy Jane at 8:00 AM