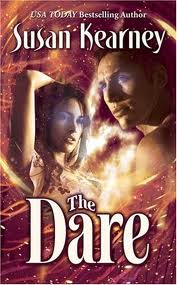 Welcome to my character review #3 where I will discuss a very unique character named Dora. No, she's not a little Hispanic girl with a cute black bob. The Dora I'm talking about is featured in The Dare by Susan Kearney and she is one of the most unique characters I've ever read. This is actually the second book in Susan Kearney's series about Rystani warriors, but like many paranormal romances can be read as a stand alone novel. It doesn't require reading the first book to understand the storyline.

So, let's discuss Dora. She is sassy, sexy and sarcastic, three things I love in a strong female character. What sets her apart? She began life as a computer and for three hundred years remained that way. However, Tessa, an earthling, finds and befriends Dora in book one (The Challenge) and Dora quickly adapts to her personality. Dora learns from Tessa and from watching Tessa's evolving relationship with a Rystani male named Kahn. As she learns, Dora evolves into more than just a sentient computer. She has emotions and reacts to situations much as a human would, albeit a human without a body. One of her reactions includes a very serious interest in a single Rystani male named Zical. He's strong, smart and fiercely loyal. She admires him and enjoys moving satellites out of orbit just to spy on him at will. Maybe she sounds a little obsessed, but even she doesn't understand the full scope of her feelings until she achieves the impossible. She grows a body and transmits her personality into it, becoming a full, real-life human woman.

I loved Dora because she uses her astounding intelligence and logic, mixed with a little imagination, to achieve the amazing goal of turning herself into a completely different entity. Numerous obstacles arise both in the learning process of becoming human and in her ultimate goal of gaining Zical's affections, but she never gives up. She sacrifices much and ultimately has high rewards, but her struggle was a fascinating journey. This is the kind of character that science fiction is all about and one that every true sci-fi fan should meet.

Would you like to win a copy of The Dare to judge for yourself? Comment below on what you would do if you could slip your mind into a computer mainframe for a day. Sounds strange, but nothing's impossible in paranormal romance! I'll choose a winner on Wednesday afternoon, please include your email address in your response.
Good luck!
Posted by Author Missy Jane at 2:13 AM