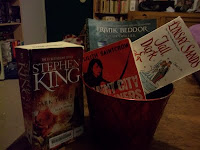 By now you've all probably heard of the "bucket list", the top however many things a person feels they should do before they die. Some wish to travel the world, some prefer to accomplish a task, others might already have an impressive list to add to. For me it's really quite simple. I want to meet all of the authors I admire before I die. I've always been an avid reader. Some of my earliest memories are of curling up with a good book. So when I first heard of the bucket list I immediately thought of who I'd like to meet before I die.

I've been very lucky in that I live near the fourth largest city in the nation. Houston is a hub for the entertainment world whether it be Arts, Music, Theater or even Literary. In 2007 the Romantic Times convention came to town and I was able to meet great authors like Nina Bangs, Gena Showalter and Shana Abe'. In 2008 I attended the convention in Pittsburgh and met Christine Feehan and Mary Janice Davidson, among others. Laurell K. Hamilton and Patricia Briggs have also come into town and one of my all-time favorites, Stephen Lawhead, made a stop in Austin earlier this year. With those wonderful authors my list is quickly filling up, but not exactly complete. I still have quite a few to go before I meet my end. 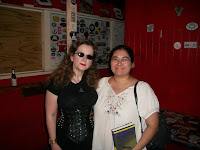 The top of my list at this time is Stephen King. I know he is one I most likely won't ever get the chance to meet. He lives and plays in Maine. It's very far away and not a place I'll travel to in the foreseeable future, but I can dream. His son, Joe Hill (another fabulous author), will be in Austin at the World Horror Con this weekend, but my plans to go were derailed early on. Next would be Clive Barker, another unlikely one. I honestly don't even know what country he lives in but I've never heard of him traveling in Texas. Such a shame. After those two there is Frank Beddor. From everything I've read about him online, he is actually a more feasible goal. He's been to conventions before in support of his Looking Glass Wars trilogy and Hatter M comics. Now I just have to make it to the conventions myself. 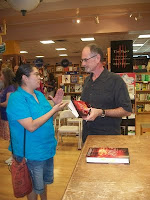 On to the romance genres. Lilith Saintcrow tops my list of paranormal/urban fantasy authors. I've already met Anne Aguirre (she is awesome!) who would naturally be second. Then there is Lynsay Sands and Emma Holly. I have to admit I would probably squeal like a fangirl if I ever got to meet theses ladies and embarrass the hell out of myself. Maybe stalking them on Twitter is best for now.

That's certainly not all and the list grows every time I read a new-to-me author. So, who is on your author bucket list? Have you already made plans to meet them soon? Share in the comments below and don't worry, I won't be mad if I'm not number one ;-)
Posted by Author Missy Jane at 9:40 PM