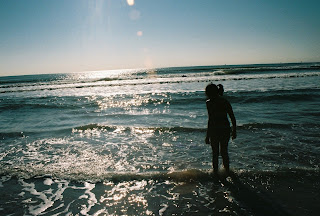 I was talking to teen #2 a couple of days ago and she mentioned how one of her classmates said she was bi(sexual). She said this in the same tone of voice she would have mentioned someone's new Iphone or what she had for lunch that day. What surprised me the most wasn't that a teenager in high school would admit to her friends and classmates that's she's bi, or even the fact that she is bi, but that she knows that. I remember in middle school a very loud and obnoxious girl asked me if I was (don't remember the term she used but she rocked her hand side to side, palm flat facing downward), or if I liked boys. At first I had no clue what she was even talking about but then someone clarified by asking if I liked girls. Everyone around us laughed and humiliated the hell out of me. I told her of course I liked boys just none in our school.

When I was that age and even into high school it was still taboo to be anything but heterosexual, or at least to admit it out loud. There was one girl in the class below me who was admittedly a lesbian. I had no problem with her, actually hung out with her a few times, but there were many others who did and were very vocal about it. I remember thinking they were idiots but I never said anything. I treated her the same as I would treat anyone else, but never defended the bad stuff I heard because I didn't think she would care. Also, I was kind of confused. At that age (somewhere between 14 and 17) I really only knew there were certain guys I thought were cute. But for the most part they were all immature assholes. I had no idea if I liked girls or not. I just didn't think about it all.

The fact is, I wasn't really, truly secure in my heterosexuality until after my teenage years. Perhaps if I had given it real thought I would have known for certain earlier but I didn't. Sure my friends told dirty jokes and there were some talking about having sex from time to time. But we weren't really a group that focused on our sexual preferences. We wanted to have fun, listen to music, watch movies, hang out, and just generally be teenagers doing teenage things. Hell, I didn't even smoke pot. Some may think I missed out but I certainly don't.

So, what I'd like to know is are we helping or hurting our kids by being so open minded and openly discussing sexual preferences now? I have an uncle who is gay and I still remember the day I found out. I was shocked but then once my initial reaction wore off I realized it really didn't matter. I went on my merry little way and didn't think any differently of him than before. I just understood why he had that male friend that had always been around my whole life.

I want my kids to just be kids for as long as they can because frankly, adulthood sucks. I don't want them to have to worry about adult things until they are adults. To me, teenage years are full of enough concerns. Why worry about sexual preferences when you're too young to worry about having sex? I've been very honest with all of my girls. I know they're going to have sex, I'm not an idiot. But I've told them of the complications and dramatics it will entail. So I kind of wish teen #2's friend had just kept that info to herself because it really isn't anyone's business. But now that we're such an info based society I don't think there's such a thing as personal boundaries on that kind of info anymore.

Damn shame if you ask me.
Posted by Author Missy Jane at 6:00 AM