Do You Know Melissa Aires? 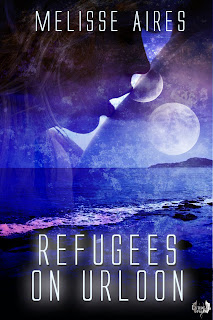 Today I'm happy to have another Melissa on my blog! Welcome Melissa :-)


Meet My Heroine! Svana Morgas, a medium height, medium build, dishwater blond hair, brown eyed, forty-something woman. My new release, Refugees On Urloon, is a science fiction romance set on an exotic waterworld. Like many scifi books, there is a galactic war, and my heroine Svana is affected by it. But Svana is not what you might be expecting. She is not a kick-ass heroine, with blasters strapped to her hips, taking out the alien invaders with high kicks, gymnastic evasions and sharp shooter skills.. She's a middle aged supply clerk. She's a survivor. She's a single mom. As a young wife on an agricultural world, Svana lost a husband and two small children when the Asha invaded. Refugee camps, relocation, work in munitions factories on industrial worlds followed as she dragged her surviving child from place to place, seeking a stable life. Finally, Junia is grown and safe, living and working as a chemist in a huge munitions complex. Svana becomes a military support staff--a non-military trained worker with mundane responsibilities-- managing a warehouse of supplies on a Academy Training vessel used to train students in Ship Command. She never expected to be flung across space in the backlash of a powerful weapon. You can read Svana's story in Refugees On Urloon,

BLURB:
Two weary refugees, two moons and a life-changing fertility festival. Watch out for a whole lot of sensuality.
Under normal circumstances, Svana, non-military maintenance crew, and Captain Liam Ringel, a highly respected military instructor, would never have crossed paths. A sudden anomaly, however, thrusts them into deep space where they are rescued by the inhabitants of an exotic and isolated waterworld, Urloon.
With no rescue forthcoming, the refugees can choose between adapting to the sea or farming the land. Svana is saddened when her budding friendship with Liam changes due to their different choices. However, when they are invited to an alien fertility festival, the Moonfest, they are given the opportunity to create a memory that will impact and intertwine both their futures.
WARNING: Alien fertility festival, aurora lights, dancing alien beasts, body paints and hot pheromones. M/F Sensual.
More information can be found on my   Refugees On Urloon Celebration Blog Tour!
Thanks for having me, Missy!
-Melisse Aires
Posted by Author Missy Jane at 6:00 AM