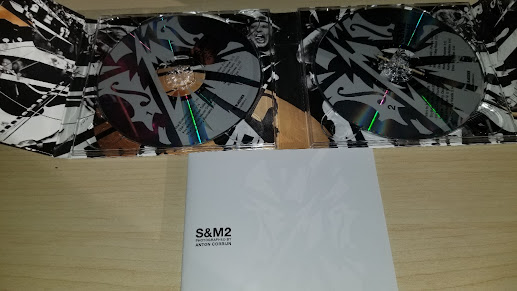 High school marching band was a savior for me. As a Freshman I moved not only to a new school, but a whole new district. I knew absolutely no one and, having gone from the city to a suburb, had no idea how to fit in. Then I was put into band class and suddenly had something in common with about 300 other students. It was a game changer. The very first show, where I just kind of stood on the sidelines, was also a huge eye-opener. Up until then I had listened to very little Classical music. I knew who Beethoven and Mozart were, but that about summed it up. Hearing that first show created a love for Classical music that has expanded over the years.
I've never been a big fan of recorded live shows. Too often, live music doesn't live up to my expectations either because the songs sound too different, or the band just doesn't sound as good live. However, Metallica has never had those problems. I've seen them live a few times and each time has been a great experience that stayed with me for weeks, if not months, after. They are one of my top five all-time favorite bands, so getting not one, but two CDs that mix Metallica and Classical music rates in my top favorite all time things of 2020.
Live music is what I miss most in these Covid times, so I really enjoyed listening to this 2 CD set of live Metallica. It starts out with my favorite of their instrumentals, The Call of Ktulu, and the symphony slips so seamlessly into the song that it's as if they've always been there. Disc one hits on at least four different albums, with an enthusiastic crowd singing along with James throughout.
Disc 2 starts out with Lars thanking and welcoming Metallica Club members. He thanks San Francisco and points out the many countries represented in the audience. Then he introduces the musical director, who thanks the symphony and Metallica. Then the symphony (alone) plays the Scythian Suite, a short tribal sounding piece that's very drum heavy, which I like. After that Metallica joined them for The Iron Foundry. The rest of the disc includes more classics, including my favorites Wherever I May Roam and Master of Puppets. Hearing James sing an almost acoustic Unforgiven III is a reminder that the man has an awesome voice.
But, the absolute highlight of the whole thing was the tribute to Cliff Burton with the symphony's take on (Anesthesia)-Pulling Teeth. It began with a slow standing bass solo that I could honestly listen to for hours. Then Robert Trujillo joined in to add the electric bass sound. Not gonna lie, it gave me goosebumps.
Overall, it was money well spent and I honestly enjoyed it more than S&M 1, which I think I only listened to all the way through once. If you're a Metallica fan who has been missing live music you'll like the Metallica songs on this 2-disc set. If you're a Classical music fan who's favorite section of the symphony is the percussion section, you'll like disc 2 for certain. If you're like me, both a Metallica and a Classical music fan, you'll enjoy both discs even as they make you yearn to attend a live show again.
Posted by Author Missy Jane at 7:00 AM